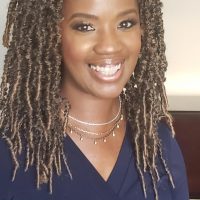 Traci Carter Holsey is an emerging director and award-winning producer originally from East Cleveland, Ohio. Her narrative writer/director credits include student projects, SAME HUG, WITHOUT A WORD, and her current short, THE PROMPOSAL about a high school senior forced to quarantine with her overprotective mother weeks before her senior prom. The short was just named an official selection of the Hollywood Gold Awards, The Golden State Film Festival and The Rhode Island Black Film Festival.

Traci draws from personal storytelling as a way of creating humorous, heartfelt, universally appealing stories that place women at the center of their own narratives. Traci holds a BA in Film/Television from Howard University, a certificate in Feature Film and Television writing from UCLA Extension and an MFA in Directing from Mount Saint Mary’s University.

Traci is an active member of the Producers Guild of America and the Screen Actors Guild.