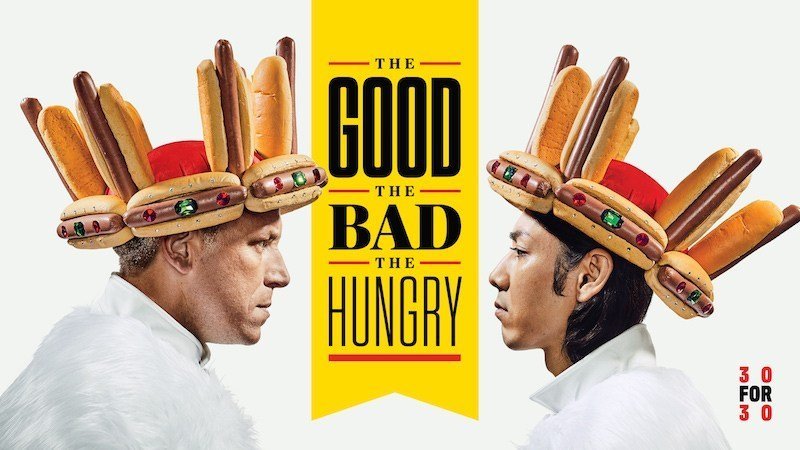 WIP FILM SPOTLIGHT highlights Member Films that screened through the Works in Progress Program and went on to great success!

In 2019, AWD Member Nicole Lucas Haimes screened a cut of her film THE GOOD, THE BAD, THE HUNGRY for an audience of fellow AWD directors at a WIP screening. The film went on to premiere at the Tribeca Film Festival and screened on ESPN as a part of their 30 FOR 30 docuseries. Nicole chatted with us about her film, the fascinating subject of the doc, and her experience in WIP.

AWD: Let’s start at the beginning – how did you come to direct a documentary about competitive eating? Were you familiar with the sport beforehand?

NLH: I had no idea eating contests were an organized sport. Before I directed THE GOOD, THE BAD, THE HUNGRY, my only experience with competitive eating was from childhood contests with my siblings involving obscene amounts of Tabasco sauce.

I only learned about the annual July 4th hotdog eating contest when Jenna Anthony, then with ESPN Films 30 For 30, approached me about the idea of profiling two top players in the world of competitive eating. They pitched the overall idea, mentioned they were talking to other filmmakers and asked me to come back to them with a specific approach. I explored the idea and became fascinated by the intensity of the sport and the bitterness of the rivalries.

You have a long credit list as a documentary director. Was there anything in particular about THE GOOD, THE BAD, THE HUNGRY that was new for you as a filmmaker?

There were several things that were new for me as a filmmaker.

Clearly, the world of hotdog eating does not have the built-in cultural impact of, say, police wrongdoing, the focus of my current project, or the gravitas of DC Sniper Lee Boyd Malvo’s explanation of why he went on his murderous rampage. It was new to have the opportunity to shape a documentary in a more literary, narrative style that focused on character arcs and the intersecting storylines of the main subjects while maintaining journalistic accuracy.  Specifically, we looked at the storied rivalry between Joey Chestnut and Takeru Kobayashi and the controversial mastermind behind the sports’ rise to national attention, George Shea.

What was also new was the challenge of handling cinematically the gross-out of the eating contests themselves.  While we shot new scenes with our main subjects, the film is primarily built around interviews and archival footage of eating that shows people shoveling massive amounts of food into their bodies. I had to lean into this reality of what we had to work with, which I found challenging because I knew we’d lose some viewers who would find it offputting.

An aspect about the film that really struck me was the way you were able to weave in a story of a cultural differences between the two main competitors, Takeru Kobayashi and Joey Chestnut. Was that something you knew you wanted to focus on going into the film, or something that grew out of the process?

The portrayal of the cultural differences evolved organically as we went through the process of making the film. Shooting Kobi in Japan allowed us to experience quite viscerally what his life was like there.

In additional to the cultural aspects, THE GOOD, THE BAD, THE HUNGRY was also revelatory in the way that it focused less so on the more gruesome aspects of the competitions and more so on the mental and physical preparation that goes into being a competitive eater. As a documentary filmmaker, do you have any tips on how to approach subjects to get them to open up in authentic ways about what really goes on behind the scenes in their lives?

I set out to understand what drove each character to strive for greatness and the emotional and psychological landscape that fueled their actions.  I am always thinking about character development, character arc, and plot and spend a lot of time off-camera learning about the subject’s inner and outer life and the obstacles they’ve faced to achieve their goals. I spend as much time getting to know them as the budget and subjects permit. This helped enormously in achieving an authentic interview. When it is time to do the on-camera interview, I prepare questions or an approach crafted to feel fresh to the subject.

You screened a cut of this film at a Works in Progress in 2019. What did you learn from that process? How did the feedback help you, either with this project or overall as a filmmaker? What advice would you have to filmmakers looking for feedback on their work?

I love, love, love getting feedback, because after all, we make films for audiences, and who better than an audience of directors. Specifically, I learned that the overall story was working, and there were a number of insightful comments, especially about the “gruesomeness” of the eating itself.

My advice to filmmakers is to listen to feedback, write down the notes, and do not defend oneself. (I am generally so nervous showing my work to a live audience it takes me a day or two to process the experience.) Then later in private, assess the comments by oneself and also with the team to determine what notes can be ignored and what feels right and resonates.

Nicole Lucas Haimes is an Emmy-nominated documentary filmmaker and non-fiction television showrunner known for her compelling portrayals of characters and insightful storytelling told with humor and heart.

Her work has played in major film festivals and been televised worldwide. Her credits include CBS, BET, A&E, and the ABC News flagship documentary series, TURNING POINT. For PBS, Haimes wrote, produced, and directed the Emmy-nominated CRACKING THE CODE. She wrote, directed and co-executive produced for A&E, CONFESSIONS OF THE DC SNIPER, featuring the first exclusive interview with Lee Boyd Malvo. She was the showrunner for Z Living’s Conquered, a 6 episode docu-series profiling extraordinary stories of courage and triumph.

Her feature documentaries include the New York Times critic pick CHICKEN PEOPLE, which opened at SXSW prior to its 2016 theatrical release in the US and Australia. It received nominations for the SXSW’s Gamechanger award, Nashville’s grand jury prize. Her critically acclaimed film, THE GOOD, THE BAD, THE HUNGRY, for ESPN Films 30 For 30, premiered at Tribeca in 2019. The Washington Post called it “sharply drawn, surprisingly intimate…brilliant.”

She is currently co-directing with Charles Burnett a feature documentary that focuses on corrupt policing.

Learn more about Nicole and her work via her website.

Want to know more about WIP? Find info on the program here. AWD Members can submit their films here.