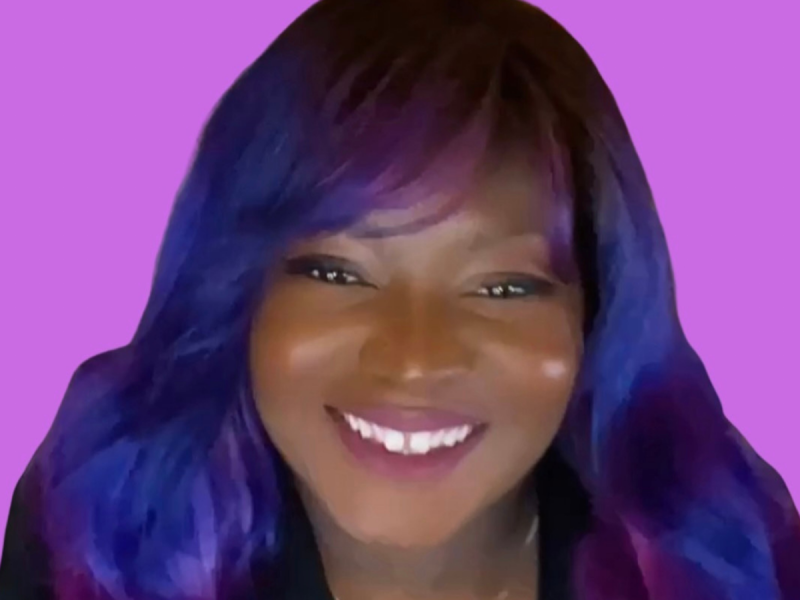 AWD Member Asha Chai-Chang is an award-winning Writer/Director and Emmy-nominated Producer. A first-generation Afro-Latina and Caribbean-Asian American with disabilities, Asha is a stigma disruptor as a Yale graduate and former finance professional turned production company owner. Asha is making strides as a 2022 TV Writer Fellow in the Inaugural RespectAbility Children’s Content Disabled Creators Lab and a 2023 Writer/Director Fellow for the Los Angeles Latino Film Festival (LALIFF) Inclusion Fellowship, both sponsored by Netflix.

As a sci-fi/fantasy nerd and gamer, Asha inspires people of color to get into STEM through her projects and as a panelist at Comic Conventions and Universities. Her sci-fi comedy Spoiler Alert and family drama All by Design have been recognized by Oscar-qualifying film festivals and the NAACP. Impacting audiences of all ages, Asha is creating a preschool animated Spanish bilingual TV series Wendy on Wheels and fantasy teen comedy Harlequin Heights.

As an invited guest of the President of the United States, Asha recently visited the White House in celebration of her advocacy for diversity and disability inclusion and the 32nd Anniversary for the ADA. Dedicated to highlighting films made with and/or by disabled creatives, Asha serves as a Co-Founder, Co-Captain, and Juror for the Academy Award-qualifying Unstoppable program at Slamdance Film Festival and has been interviewed by publications including Variety, Hollywood Reporter, and Forbes. Asha also serves on AWD’s BDAI Committee, as well as is a founding member of the Platano Pipeline by Blactina Media, and CEO of Love My Productions, LLC.

AWD spoke with Asha about her experience as an AWD member, her directorial debut, as well as her recent accomplishments and upcoming projects.

AWD: When did you first join AWD and how do you feel you’ve benefited from being a member?

ACC: I became a member of AWD during the pandemic in 2021, it was a long time coming. Where to start – there are so many benefits to being a member of AWD! The social events – getting to meet, feel seen, and feel heard with fellow Directors is rare in this industry and I am glad to have found that here. The year-round Guild and Academy level event invitations. One of my first events I had the pleasure of attending when I took the leap from North Carolina to Los Angeles, was the AWD Exclusive invites to Netflix FYSEE events. Not only was the For Your Consideration (FYSEE) fantastic due to the access you have to creatives who currently have their projects on Netflix, (dude, I met the Creator of Squid Games and the Duffy Brothers of Stranger Things IN PERSON how epic is that!) fellow audience members are in the industry and it made my transition to LA super smooth and collaborative from the start.

As a Year 2 participant of AWD’s Black Directors Advancement Initiative, as well as a member of the BDAI Committee, what are you most looking forward to and/or hoping get out of this program? What led to you becoming involved in the Committee?

I was led to become involved in the BDAI Committee because I am dedicated to Black Excellence and want to be a resource to AWD Members in any way that I can. As a participant in the Black Directors Advancement Initiative, I want to learn about the next best steps in my career and to gain wisdom from those who have paved the way before me. It’s good to admit that you don’t know everything and be receptive to receiving mentorship and insight.

Proudly a 2021 RespectAbility Entertainment Lab alumna, which took place during the summer and we connected with executives and working creatives from Disney, Nick Jr, SONY Pictures, Bunim & Murray, and many more. We were able to share work with each other, learn more about disability inclusion & advocacy, and gain mentors; my mentor from BuzzFeed pushed me to write a certain amount of scripts. That mentor’s push along with the mentors I was blessed with from #Startwith8Hollywood by Women of Color Unite is what prepared me for the opportunities I’m seizing now, like the Children’s Content Lab with Netflix! One of my first readers for Wendy on Wheels was one of the speakers we had during the Entertainment Lab from DreamWorks, who is now a friend of mine. The difference between the Entertainment Lab and the Children’s Content Lab with Netflix was the former focused on building myself as a creative with disabilities for the industry and the latter was to showcase what we are capable of and to catapult our careers to the next level. RespectAbility is breaking down barriers, walls, stigmas, and doors to show networks that disabled content creators are the next generation of storytellers. I’m overjoyed that we were able to showcase what disabled creatives can do! I was most excited to share my cultural perspective with a diverse audience. I loved that I found a way to show through children’s media that Black, Latinx, Asian, Jewish, Disabled people do exist and we experience the world in a cool, innovative way. I want to continue to make children and people like me feel seen and heard.

You made your directorial debut with the short film Spoiler Alert. What inspired you to get into directing? What were your takeaways from directing your first short?

My directorial debut was Queen of Spin, which truly doesn’t need to be mentioned, but my favorite film directing experience so far, and my first film to screen at an Oscar-qualifying Film Festival as the Director is Spoiler Alert. My inspiration to direct came from always being bossy, I’m kidding. It came from the desire to share how I learn. I am a visual learner with a photographic memory and I love being able to say more with less. In television and film, you can tell stories frame by frame. I thought because I have strong analytical skills and business acumen that I would be a producer for life. Woo, I’m so glad that I stepped out of my comfort zone and shared my lens on stories with others; it’s a liberating and vulnerable experience. After directing my first short, I knew I found my happy place.

What inspired you to start your production company, Love My Productions LLC? What type of content are you interested in creating?

The global success and warm reception of my films, as well as filling a void for the types of films we would like to see inspired me to start Love My Productions, LLC. As a Production Company owner, I have the opportunity to green light films that serve underrepresented communities and subcultures, projects that are suitable for family and universal programming, and to apply marketing techniques that I’ve acquired over years of experience. Furthermore, when I’m not speaking, consulting, and/or programming for film festivals, it’s a great way to keep me centered on what I love- Production. I refer to production as my chaotic joy!

In my next phase, I’m looking forward to directing sci-fi/fantasy and comedy feature films and bringing work that I’ve written to screens around the world. On that journey, I’m fortunate enough to develop and package my Spanish bilingual, preschool animated series Wendy on Wheels, which stars a disabled Afro-Latina, for networks. We had the live stage reading of one of the episodes in NYC for the RespectAbility Children’s Content Creators Lab sponsored by Netflix. I am also the writer/director for my next bilingual film Marque Dos which is a recipient of a $30,000 grant from Netflix as one of five Afro-Latinx Fellows in the Los Angeles Latino Film Festival Inclusive Fellowship. In between all of that, I am having meetings and developing my sci-fi/ fantasy series Harlequin Heights.  It’s beautiful to see what other ordained steps are in my life path as I fully love and accept who I am – it shines through my work.

Want to learn more about fantastic AWD Members like Asha?