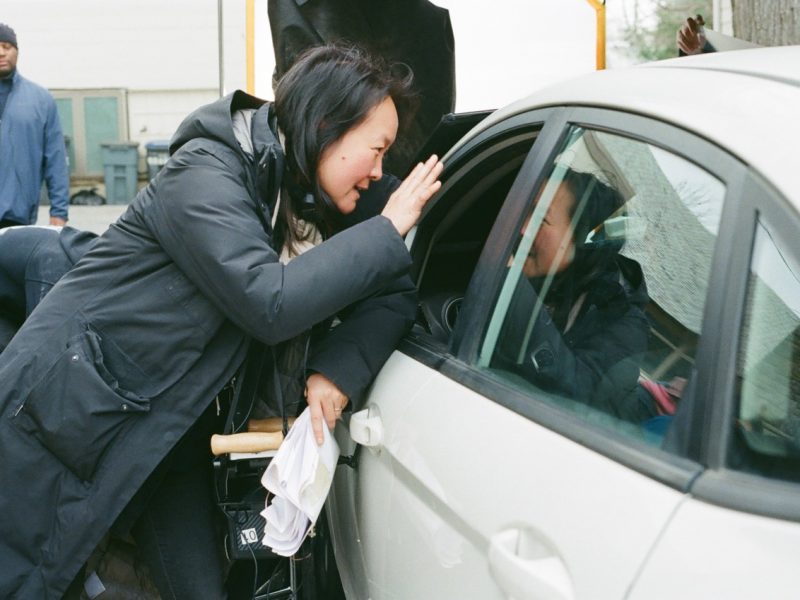 Born in South Korea, AWD Member Anna Sang Park grew up in Seoul, then Philadelphia. An award-winning, multifaceted filmmaker, she is the writer and director of the short film trilogy, THE CHO STORIES (2021), which won the Audience Award for short film at the 2021 Middlebury New Filmmakers Festival. APPA APPA APPA (2021), one of the shorts in the trilogy, won Best Short Film at the 2021 Peekskill Film Festival, as well as Honorable Mention for Narrative Short at the 2021 Bushwick Film Festival. Anna also directed and produced 9 short documentaries as part of the LEGACY LEADERS OF COLOR VIDEO PROJECT (2017). Additionally, she has directed 125 episodes of the SAY YES TO THE DRESS franchise. Anna has an MFA in Directing from Feirstein Graduate School of Cinema, Brooklyn College and a BFA in Film from Emerson College.

AWD spoke with Anna about her recent successes, her time as a producer, and what is up next for her as a filmmaker.

AWD: Congratulations on all of your recent success! Your short film Trilogy, THE CHO STORIES, recently screened at NFMLA has received multiple festival accolades, including the Audience Award for short film at the 2021 Middlebury New Filmmakers Festival. Can you tell us about the project and how it came to be?

ASP: I left Korea when I was eight years old and grew up in the Korean American community in Philadelphia. I wanted to portray the characters I grew up with and the families that surrounded me at that time. I wanted to reveal a story about a Korean American family from the perspective of different characters – the mother, the daughter the father and the aunt. The mother struggles with a gambling addiction and her addiction shatters this family. The different perspectives led to the film being told in a chapter format, so The Cho Stories is comprised of 3 short films. I didn’t plan to make a trilogy, I would say the characters led me to the format.

This year, you were accepted as a fellow in AWD’s Directing the Actor Lab, led by AWD Founder Jennifer Warren. How has the experience been so far?

Getting to know Jennifer and learning from her directly has been a pleasure. Jennifer is incredibly generous as an instructor and she shares her wisdom and techniques wisely and thoughtfully. Being in a lab / workshop with fellow AWD members has also been a gift. We’re not out of this Covid era yet and finding community and being surrounded by other women directors has been inspiring.

In addition to your narrative work, you have directed over 135 episodes of factual/nonfiction TV. How have your skills in that medium transferred over to help you as a narrative director?

Documentary/non-fiction directing is about capturing reality in some way, and the script/story is often written after the filming. So, you learn to craft in bits and pieces and sculpt the narrative on your feet and in the edit. My non fiction episodic directing strengthened my muscles to work with multiple cameras. Directing scenes with 2-3 cameras regularly for coverage allowed me to experiment with angles and pacing. I think non fiction directing gave me the freedom to experiment and to work with different structures.

As a narrative director, I love working with actors with material that’s scripted ahead of time. Directing narratives gives you a structure to the story crafted before you shoot and it requires much more coordination with crew, equipment and talent, but I also agree with Martin Scorsese that the delineation with non fiction and fiction shouldn’t be so black and white. He argues that the mediums are interrelated, and I agree.

As a director, the main skill that I have transferred from non fiction to fiction is how I communicate effectively with my crew and talent. That doesn’t really change in fiction or non fiction. Essentially, you want to get what’s inside your head and translate it into a series of actionable steps that will take shape in visual and sonic realms….and you want your collaborators to engage and help you bring what’s inside of you to the outside. Directing for me is about leadership, and treating everyone with respect. I learned to be an effective leader in non fiction and I carry that with me in my narrative work.

You are also an incredibly accomplished producer. Do you have any advice on how directors can work well with their producers and vice versa?

Embrace working with people who share your philosophy. Stories are important but how you approach life is even more important when working with collaborators. You are going to be spending weeks, months, years with your director and producer, so ask yourself if their desires and concerns and interests are parallel to your values. Can you grow from working together? Do you challenge each other? Do you share the same work ethic and integrity about storytelling? I think people often get lured by money and status but it’s critical that you jump into an artistic marriage that has healthy patterns. The director and producer relationship is profound – you are making something that doesn’t exist into reality and sharing it with others. That comes with a great responsibility.  But above all, work with people who like to play, have fun, who are positive, and can lift each other’s spirits. Filmmaking is difficult and you need to surround yourself with people who are optimistic, persistent and incredibly hardworking.

What is up next for you as a filmmaker? Where can we find your work?

Currently I am writing a limited series about a Korean American family and directing another short film this summer. I am producing an indie film that’s in post production called STOCKADE. It’s a micro budget feature written and directed by Eric McGinty who is also my husband. It’s our second feature as a team and we are making it with our friends, who are our film family under our small production company – Veronique Films. I am also one of the judges for the Women’s Weekend Film Challenge and on the short film jury for Middlebury New Filmmakers Film Festival this summer.

My short documentaries are on BRIC TV and TCG website, the feature film WALLABOUT I produced is streaming on Amazon and my short film trilogy is currently on the festival circuit. If you would like a screening copy – you can reach out to my rep – Sara Alexander at Alexander Creatives.

Want to learn more about fantastic AWD Members like Anna?