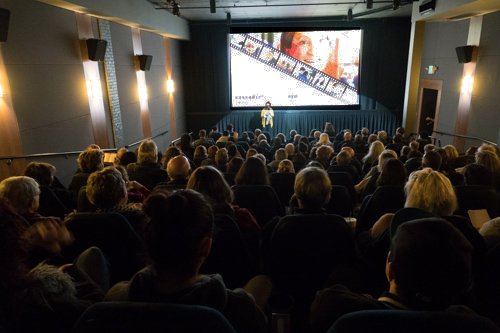 Photo:  Cheryl welcomes the festival audience at Opening Night in the Pickford’s theatre

A newcomer to the film festival circuit, CASCADIA is one of only two festivals in the United States that shows films directed exclusively by women.

The festival is located in Bellingham, a community with a vibrant arts scene including the Pickford Film Center, named after Mary Pickford, one of the early women pioneers of the film industry. It’s clearly a community that has deep roots in honoring women filmmakers and the arts in general. Can you tell us a little more about it?

Bellingham is an amazing community when it comes to the arts. When I first moved here from Los Angeles, I was astonished at the number and caliber of people in the arts who had also been attracted to the area. I had not experienced a city the size of Bellingham that had such depth culturally, from the historic 1,500 seat Mount Baker Theatre that had been restored shortly before I relocated here, to the offerings through Western Washington University (WWU) and the lively Arts District, where the festival now occurs, that’s full of restaurants, galleries and clubs that feature live music almost nightly. It is extraordinary.

The Pickford, Bellingham’s non-profit art house, has three state-of-the-art theatres and a local membership of 5,000 people who regularly attend the films there.  So it was a no-brainer that we’d partner with the Pickford as the festival’s home theatre. We do utilize other venues in the Arts District during the festival for our events, such as Bellingham’s Smithsonian-affiliated art museum and the Mount Baker Theatre, and we are likely to do even more as the festival expands. We’re working hard to connect with other organizations in the area to establish solid partnerships and to fully integrate the festival locally.  We’re currently cooperating with the local League of Women Voters to plan events around the 2020 centennial of Women’s Suffrage in the United States.

We live in an area that is closely connected to the local Indigenous Nations so it was only natural that we felt a strong sense to showcase films that have been made by Indigenous women.  Our first year, we screened a short documentary feature by Lyn Dennis, a member of the Lummi Nation and the Tahltan Band, called “The Muckleshoot Sla-Hal Bone Game,” about a traditional competitive inter-tribal gambling and guessing game that few non-natives know much about.  Lyn is now a member of our Board of Directors.

Last year, we featured a full-length narrative “Sun at Midnight” by a non-native Canadian director, Kirsten Carthew, but for which all the actors and much of the crew was First Nation.  It was a beautiful film shot in the Yukon about an unexpected friendship between an grizzled caribou hunter and a teenage girl rebelling against her native heritage. We paired it with “NiiSoTeWak: Two Bodies, One Heart,” a short film by Jules Koostachin about her twin sons and what it means to be twin in Attawapiskat culture.

We’re also presenting “Kayak to Klemtu,” a narrative feature by Canadian director Zoe Hopkins, who is Heiltsuk/Mohawk, in the local Treaty Day film festival in January. The festival is one that we hope to continue to partner with in the future as well. It’s hosted by Children of the Setting Sun Productions, a local production company dedicated to marketing Native American performance arts.

Like AWD, part of CASCADIA’s mission is education for audiences and filmmakers. What types of panels and workshops have you offered in previous festivals?

Two years prior to our officially launching the festival,we presented films as part of the Pickford’s month-long documentary film festival in 2015. As part of that, we staged our first panel discussion in 2015, Breaking the Celluloid Ceiling, which focused on how women have and can break through that big gender barrier in the film industry, particularly as it relates to directing films. Since then we’ve offered panels on Virtual Reality and 3-D technology, editing the documentary, animation and mentorship opportunities for both men and women in the film industry.

In addition, we’ve partnered and presented a film on the WWU campus as a pre-festival event the evening before the official opening night and followed each of these with discussions that dealt with cyber bullying and how Indonesian women are making a significant difference in the political landscape there.

We also host a Script Studio on the Sunday morning of the festival. The selected short scripts are read by an ensemble of actors before a live audience, followed by comments by a panel of film industry pros from L.A., New York, Vancouver and elsewhere. Local bakeries — of which Bellingham has an abundance — provide tasty breakfast breads and pastries to sustain us during that three-hour session. Scripts from previous years have gone on to win in competitions at other festivals. All of these panels have been open to the public as well as filmmakers attending the festival at no charge.

How has your background as a photographer, writer, and member of several arts and community boards influenced how you approach running the festival?

I was one of the founders and a president for two terms of Independent Writers of Southern California which has been around now for about 30 years. Getting a group of writers together in one room to agree to the wording of a constitution and by-laws was good preparation for putting a film festival together, as it turns out. When you’re dealing with a lot of creative minds, as we have here, there are challenges in getting everyone on the same page. Fortunately, everyone involved with CASCADIA since the beginning has been extremely dedicated to our overall mission so that we keep moving forward. Otherwise, it’d be an organizational nightmare.

As professional photographer, I of course think I have a strong visual eye that comes in handy in a variety of ways for a film festival.  As a writer, I’m always looking at story because that’s, at least for me, where everything starts. My husband, Michael Petryni, wrote for a number of television series and TV movies when we lived in Los Angeles so I have a pretty good understanding of the industry from the creative end. Overall, I think my arts background (I have a degree in music too) serves me when it comes to understanding what it takes to get a project like a film done and the emotional investment you make in it.

The hardest thing for me, as executive director, is to tell a filmmaker that CASCADIA can’t use their film for whatever reasons, because I know that they’ve poured their heart and soul, not to mention time and money, into the making of it.

What does the festival hope to achieve in the next five years?

First and foremost, we want to continue to be around and hope to have created a greater awareness and appreciation for the work that women directors are doing as well as the need to increase parity of women directors.  After that, we want to expand and build upon what we’ve started.

We’re also looking to expand our educational opportunities for both filmmakers and audiences too.  We launched a four-month educational film series this year called Visions and Voices: Forgotten Films by Cinema’s Women Directors and are focusing on films directed by women from the silent movie era this year. We want people to know that women directors, at one time, dominated the film industry. And to see some of the forgotten masterpieces.

We’d also like to eventually introduce an invitational ‘summer weekend retreat’, like Rocky Mountain Women’s Film Festival has done for directors who’ve been accepted into CASCADIA; to host a small group together for a long weekend here where they have no agenda but just a place to network, share experiences, stories, frustrations in a somewhat ‘safe’ environment.  And to have a good time with one another.

What are some of the top must-see places or events for filmmakers and festival-goers when they visit Bellingham for the festival?

The Bellingham area offers a lot to do, especially when it comes to outdoor adventures and experiences.  It is possible to ski or snowboard on Mount Baker in the morning–we have the longest ski season in the country–and then kayak or sail on the bay later that afternoon.  Hiking or biking on one of the many in-town trails is also something everyone does when they come here, including through Whatcom Falls Park in the middle of town where even I still get lost if I wander from familiar trails. And then there’s the ‘tap trail.’  Bellingham is home to more microbreweries than anywhere else in the country I’ve been told and those who live here take their beer seriously so you can spend some serious time sampling all the different local brews. You can finish off an evening by taking in a show at any one of the city’s numerous music clubs with everything from jazz to rock to country played by musicians who not only live here but those on tour.

The Whatcom Museum of Art is a Smithsonian-affiliated museum and has excellent rotating exhibits; we’ve arranged in the past for our directors to have curated tours.  This year, we plan to give our visiting directors a guided and backstage tour of the Mount Baker Theatre because there are so few like it still around. It still have their big screen and 70 mm projectors although those are currently in storage.

You can make day trips up to Vancouver B.C., we’re only 45 minutes to an hour from downtown, or over to the San Juan Islands by boat.  And at the time of our festival, the tulip festival in neighboring Skagit Valley is in full bloom. The tulip fields there rival those in Holland and draw people from all over the region.  There’s also nearby towns like Lynden, a little Dutch community, and Ferndale where there’s a historic collection of old buildings and homesteads, that a lot of people enjoy too, as well as places a little further out like La Conner and Bow-Edison which are both enclaves for artists and foodies.

But honestly, there’s so much happening during the festival that people need to plan to spend an extra day or two in order to take in some of these other activities and local sights. Most people who are drawn here, residents as well as visitors, are drawn by the area’s natural beauty so you want to have some time to enjoy it.