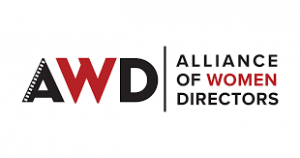 A Conversation with MJ Delaney

“My favorite type of Lasso day is doing drama in the morning, comedy in the afternoon.” Watch our full conversation with Emmy nominee MJ Delaney, director of AppleTV+’s TED LASSO. MJ is nominated for an 2022 Emmy for her work on the episode “No Weddings and a Funeral,” which is the 10th episode of the second season of the hit series and centers on the funeral of Rebecca’s father while Ted deals with the ghosts of his past.

MJ is a BAFTA-winning, twice Emmy-nominated director. Her episodic credits include the UK remake of the hit French show CALL MY AGENT, the first episode of GUTSY – Hillary Clinton’s documentary series for AppleTV+, RENEGADE NELL for Disney+, TED LASSO and all six episodes of Amazon’s FRANK OF IRELAND.

A Conversation with Jamie Babbit

Nominated for two Emmys this year for her work on Hulu’s ONLY MURDERS IN THE BUILDING – including Outstanding Comedy Series and Outstanding Directing for a Comedy Series for the pilot episode “True Crime”, director Jamie Babbit takes us behind the scenes of the hit show, talks about working with the stellar cast, and shares her influences in creating the series’ incredibly distinct visual style.

ONLY MURDERS IN THE BUILDING stars Steve Martin, Martin Short, and Selena Gomez as amateur sleuths who bond over their shared love of true crime and set out to solve the mystery of their neighbor’s death.

Jamie has directed several features and produced and directed multiple award-winning television shows. Her directing television credits include A League Of Their Own, The Marvelous Mrs. Maisel, Russian Doll, and Silicon Valley for which she received a Best Comedy Directing Emmy nomination. Her debut film, But I’m a Cheerleader, was listed by The Independent as one of the top twenty best romantic comedies of all time.

A Conversation with Nneka Onuorah

Join AWD in a conversation with director Nneka Onuorah, who is nominated for an Emmy for Outstanding Directing for a Reality Program for her work on LIZZO’S WATCH OUT FOR THE BIG GRRRLS.

In the episode, Lizzo encourages the dancers to break through the negativity and past body trauma by embracing their curves fully through a nude photo shoot, but not all the dancers are comfortable with shedding their clothes and exposing the skin they’re in. For their big event, the group learns lyrical choreography to Lizzo’s new single, “Naked.”

Nneka not only directed this emotional episode, which she was nominated for, but all of the episodes in this transformative series, which was nominated for a total of six Emmys. Nneka is a Nigerian-American filmmaker and producer committed to telling authentic diverse stories across every medium. Her most recent work includes THE G WORD with The Obama’s production company HigherGround and HBO’s “Legend of The Underground” Executive produced by John Legend. She is next teaming with Megan Thee Stallion for both a film with Time Inc & Roc Nation, and an original concept campaign with Nike.

A Conversation with Cherien Dabis

Join us for an in-depth discussion about Hulu’s ONLY MURDERS IN THE BUILDING with director Cherien Dabis, who is nominated for an Emmy this year for Outstanding Directing for a Comedy Series for her work on the episode “The Boy From 6B.”

ONLY MURDERS IN THE BUILDING stars comedy legends Steve Martin and Martin Short alongside icon Selena Gomez as amateur sleuths who bond over their shared love of true crime and set out to solve the mystery of their neighbor’s death. “The Boy from 6B” contains only one line of spoken dialogue and is told through the perspective of Theo, a character who is deaf, played by James Caverly.

Cherien got her start with her debut feature Amreeka, which she wrote and directed. The film premiered at Sundance in 2009 and went on to win the coveted International Critics Prize in the Director’s Fortnight at Cannes. The film also landed Dabis on Variety’s “Ten Directors to Watch” list that same year. Dabis made history when the film broke records in its theatrical release by becoming the most-screened Arab-directed film in US-cinema history.

In collaboration with AppleTV+, AWD brings you the following discussions with powerhouse women filmmakers! 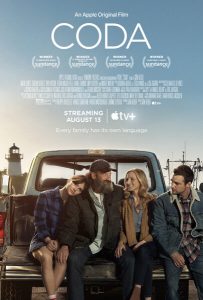 Enjoy this fantastic panel on the Oscar Nominated film CODA with writer/director Siân Heder, moderated by Tara Miele. Siân discussed the evolution of a film as a remake and studio-turned-indie production, as well as spoke extensively about her desire to bring an authenticity to the film by actively involving the deaf community as collaborators in the project. From learning ASL, to shot size selection, to sound design, the craft of directing the film was built around that authentic experience. Siân emphasized that diverse casting is not just the right thing to do, but is an additive to the creative experience. Thank you to Apple TV+, Siân, and Tara for an inspiring discussion. WATCH HERE.

We are so thrilled to bring you this fantastic panel on the AppleTV+ series ROAR with creators and showrunners, Liz Flahive & Carly Mensch, moderated by AWD board member, Nikki Braendlin. The trio discuss the genre-bending anthology series, which weaves together eight darkly comedic feminist fables that take unexpected approaches to subjects like gender roles, autonomy and identity. WATCH HERE.

In celebration of Women’s History Month, the African American Film Critics Association (AAFCA) and the Alliance of Women Directors (AWD) assembled a star-studded list of Black women directors for intimate dialogues about their craft, careers and experiences working in cinema. 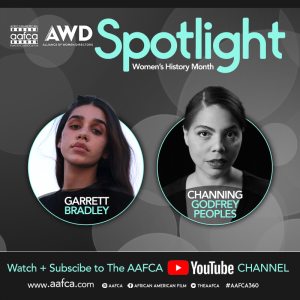 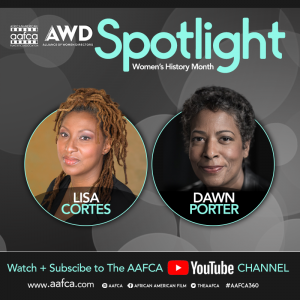 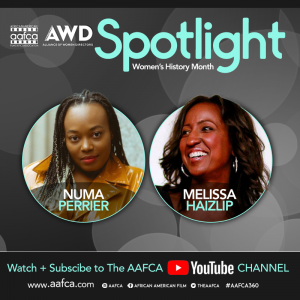 In this conversation, moderated by KJ Mathews, Garret Bradley discusses her critically acclaimed, Sundance-award-winning documentary film TIME about entrepreneur Fox Rich. Rich has spent the last two decades campaigning for the release of her husband, Rob G. Rich, who is serving a 60-year prison sentence for a robbery they both committed in the early 1990s in a moment of desperation. Channing Godfrey Peoples speaks about her critically acclaimed feature, Miss Juneteenth, which centers on a former beauty queen and single mom preparing her rebellious teenage daughter for the “Miss Juneteenth” pageant. WATCH HERE.

Moderated by Ronda Racha Penrice, documentary filmmakers Lisa Cortes and Dawn Porter​ join together in a conversation focused on using film as a tool for social change. Lisa Cortes dives into the making of ALL IN: THE FIGHT FOR DEMOCRACY (2020), which looks at the history of and current activism against voter suppression in the United States. Dawn Porter, director of John Lewis: GOOD TROUBLE (2020) spoke about the making of this film centered on the legendary activist who spent his life fighting for civil rights, voting rights, gun control, health care reform, and immigration. WATCH HERE.

Filmmakers Numa Perrier and Melissa Haizlip discuss their inspiring friendship and their unique journeys as artists with Jasmine Simpkins. Haizlip spoke about her NAACP Award-Winning documentary, MR. SOUL! As well as her upcoming project for Netflix. Numa shared her experiences working on series “SEXLESS” and “QUEEN SUGAR,” as well as her debut feature JEZEBEL. 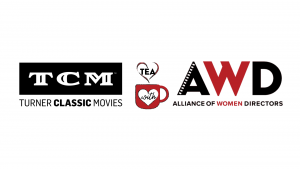 Alliance of Women Directors is proud to share this special limited Tea series in partnership with TCM. Join us for discussions with powerhouse women directors about their celebrated films and careers! 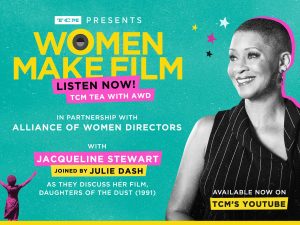 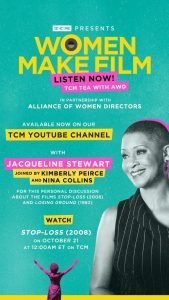 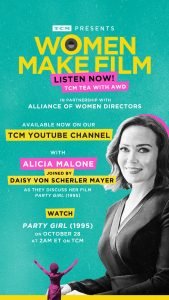 The first TCM Tea with AWD is a wonderful conversation celebrating the phenomenal Julie Dash and her historic film DAUGHTERS OF THE DUST, moderated by Jacqueline Stewart and introduced by AWD member Twinkie Byrd. Follow this link to watch on the AWD YouTube Channel.

Our third TCM Tea with AWD of the month is a fantastic discussion of the film PARTY GIRL, with director Daisy von Scherler Mayer, moderated by Women Make Film co-host Alicia Malone, and introduced by AWD Executive Director AnnaLea Arnold. Watch this Tea now over at the TCM YouTube Channel.

Alliance of Women Directors is thrilled to bring you Special-Teas with AWD, supported by Netflix. This series of webinars feature Executive Producers, Directors, and Showrunners discussing their critically-acclaimed Netflix Shows. 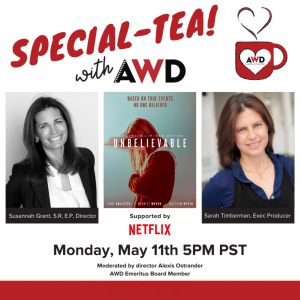 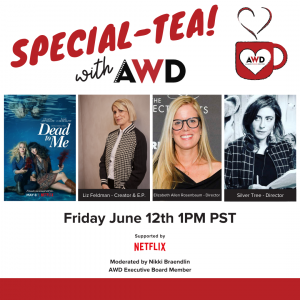 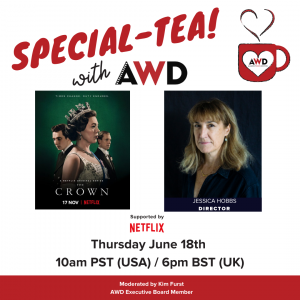 Watch the Special-Tea HERE.
Bios of guests and moderator can be found on the EVENT PAGE.

We are thrilled to bring you another Special-Tea with AWD, supported by Netflix. This chat was about season two of the Netflix original series “Dead to Me” with Creator and EP Liz Feldman, and Directors Elizabeth Allen Rosenbaum and Silver Tree. The discussion was moderated by AWD Executive Board Member Nikki Braendlin.

Watch the Special-Tea HERE.
Bios of guests can be found on the EVENT PAGE.

Join AWD Executive Board Member Kim Furst and Director Jessica Hobbs for our third Special-Tea with AWD as they discuss the episodes Jessica directed for season three of the Netflix original series “The Crown” following the life and reign of Queen Elizabeth II.

EPISODES to be discussed:

Watch the Special-Tea HERE.
Bios of guest can be found on the EVENT PAGE. 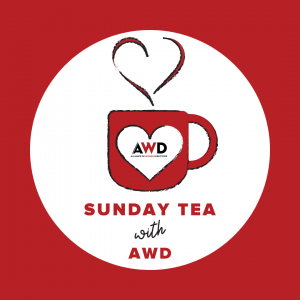 We are excited to have launched our Q&A Series, “Sunday Tea with AWD” featuring many of our incredible Advisory Board and Honorary Board members, and high-profile industry guests. Join us each week as our speakers share their expertise on a wide range of topics related to the art of telling stories in film, television, and new media.

Check out our calendar for future guests, or sign up for our newsletter to keep up-to-date on all our Teas.

Gala honoring Ilene Chaiken, Greg Berlanti and the We Do It Together organization for their work toward gender parity in the entertainment industry. AWD member Jen McGowan was awarded the Alliance of Women Directors Breakout Award for Excellence in Directing.

Salon with Director & Senior Staff Attorney at the ACLU of Southern California, Melissa Goodman, to discuss solutions to pressing issue of lack of gender equality in Hollywood.

Check out our calendar for upcoming events and support our sponsors and community partners.