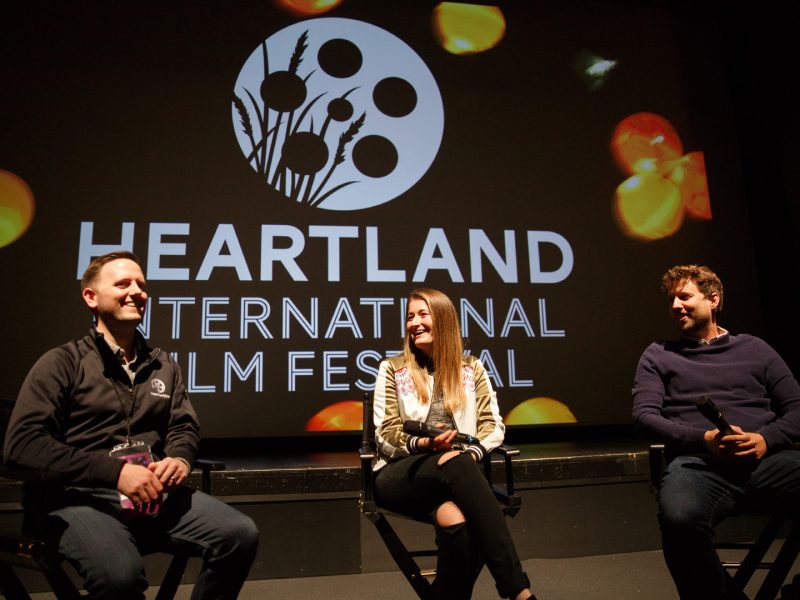 Heartland and Indy Shorts International Film Festivals – Indiana’s largest and longest-running and Midwest’s largest short film festivals, respectively – are the first film festivals to program a full block of films by the Alliance of Women Directors’ members as part of an HIFF-AWD partnership. AWD spoke to Director of Festival Programming Greg Sorvig about the HIFF’s longevity and the success of Indy Shorts’ inaugural year.

Heartland International and Indy Shorts Film Festivals are taking over the Midwest. Congratulations for having so many of the alumni films and filmmakers in the Academy Awards every year! What is it about Heartland that attracts filmmakers? And how do you discover the gems that have such an amazing trajectory?

Word of mouth and filmmaker hospitality have really been the key to Heartland’s success over the years. We can boast about our top cash prize purse ($3.3 million awarded since 1992) and Academy Award qualification, but it’s the care we put into the lineup and filmmaker hospitality that have allowed us to grow in size and reputation. As one filmmaker shared with me last year, it was clear to them Heartland cares about the lineup, the filmmakers, and the experience—this really meant the world to me. Organic and deliberate partnerships are also a key to our success, and we’re thrilled to be partners with the Alliance of Women Directors.

There is not a clear path to success for shorts like there tends to be for tent pole features launching at Venice, Telluride, or TIFF, but I have noticed distinct attributes for films that eventually gain traction across the three separate shorts categories (live action, documentary, and animated). It’s not a perfect science, but there’s definitely a shared level of quality, tone, and other technical factors unique to each category.

Both Indy Shorts and Heartland Film Fest offer cash prizes to the Finalists and Grand Jury Awardees. What do the films that are chosen as Finalists have in common? What does it take for a film to standout for consideration beyond the Official Selection? And to be selected as the Grand Jury Prize winner?

Heartland Film is a bit unique in that we identify five films per category that ultimately compete for the Grand Prizes. Filmmakers chosen to compete as Finalists have their airfare and travel covered by Heartland and win a cash prize for placing in the top five ($500 for shorts, $1,000 for features), or the top cash prize if they end up taking the juried Grand Prize in their respective category ($5,000 for shorts, $15,000 for features).

Story, authenticity, vision, technical quality, and other factors are primarily considered when selecting the films to compete as Finalists. Heartland uses an extensive review process with 90 or so volunteer screeners who initially score films before potentially moving on to second and top tier consideration.

What affects your programming decisions? Both shorts and features get a guarantee of multiple screenings and require a filmmaker to attend the festivals. It probably takes a lot of juggling.

Programming is a mix of balance, genre, subject, and quality. Features are a bit easier to piece together as one film tends to make up one block of time on the schedule, but shorts have a few more layers as we try to program thematically. We start to outline programs with strong films in waves, but eventually there may not be a common thread to merit an entire program. Additionally, we tend to outline a number of shorts programs but don’t end up having enough slots, which means we internally agonize and are forced to cut entire programs.

Filmmakers are only required to attend (courtesy of Heartland) if they are in competition as Finalists. We have a limited travel budget beyond that, but make sure anyone who attends our festivals are treated well! Baseline, we offer all attending filmmakers transportation between the airport and venues once in Indianapolis, passes and benefits for key cast/crew, quality Q&As, tickets and other opportunities. We definitely want as many filmmakers as possible, and it certainly helps in pursuit of the coveted audience choice awards.

What was the background for splitting the shorts and the features into two separate festivals? Do you see the same filmmakers submitting to both fests? Has this opportunity increased or decreased the “pollination” between the short- and the long-form creators?

Heartland Film President Craig Prater founded the Palm Springs International Film Festival with Sonny Bono years ago, and that fest successfully separated their shorts into a second event. There are thousands of film festivals around the world, but only dozens of short film festivals. Being around for 28 years, it was a great opportunity for us to branch off with Indy Shorts to reach a whole new demographic and honor the art of short filmmaking. Attendance was greater across our first year of Indy Shorts than all the shorts programs combined the previous year at Heartland International, so we started with a bang!

The Heartland Film Roadshow offers a lot of exposure to the local viewers. What has been the feedback about the Roadshow from the filmmakers and the audience? And what does the location of Indianapolis offer to the attending filmmakers?

Throughout the year we stay relevant through bringing back choice films to the community. One of our best partnerships is with the Historic Artcraft Theater in Franklin, Indiana, located just 20 minutes south of Indianapolis. The 97-year-old venue is absolutely gorgeous with a restored blade marquee and old Hollywood feel, and every March we bring back a handful of Heartland International and Indy Shorts favorites as part of our “Best of the Fest” event. We also have strategic partnerships with other major supporters of film in our city, including Newfields and the Athenaeum.

What has attracted you about Alliance of Women Directors to pursue a partnership with the organization? What do you wish to achieve with this collaboration?

Last year we premiered the feature version of Cady McClain’s SEEING IN BELIEVING: WOMEN DIRECT at Heartland International, and months before the event she told us more about AWD and its partnerships. We knew we wanted to come onboard, but timing was tight to formally announce anything prior to the event. Having recently signed on to the 5050×2020 parity pledge, we knew it would be a perfect time to move forward with AWD as well and chose to commit at the Dorthy Arzner level. With this partnership we will present a dedicated program of AWD shorts at this year’s Indy Shorts and provide waivers to all AWD filmmakers.

Is there anything else you would like AWD Members to know about Indy Shorts and Heartland International Film Festivals?

Heartland International Film Festival has been consistently ranked as one of the “Top 50 Film Festivals Worth the Entry Fee” by MovieMaker Magazine.

We’ve had great experiences featuring work by AWD members over the years and look forward to officially partnering this year!