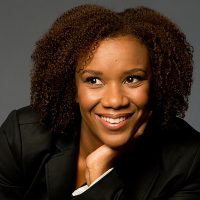 Tijuana Ricks is a graduate of the Yale School of Drama where she was awarded both the Rebecca West Memorial Scholarship and the Herschel Williams Prize for Outstanding Ability in Acting. Ms. Ricks has performed in numerous film, television, and stage productions alongside some of the greats in the industry such as Laura Linney, Viola Davis, Paul Giamatti, and Dustin Hoffman.

Tijuana was selected as a semifinalist in the inaugural Shondaland! and Series Fest Women Directors Mentorship Competition. She made her directorial debut in 2016 with the comedy pilot, The Vampire Leland - an official selection of the New York Television Festival, St. Louis International Film Festival, SoHo International Film Festival, and SeriesFest. IndieWire said The Vampire Leland has "professional gloss, plenty of fun plot threads to explore, and a wry tone that had us hooked."

In 2019, Tijuana directed her first and second web series. The first, the drama All Souls, was named an official selection by Chicago Southland Int Film Fest and DC WebFest where it won the Gold Award. The second, a comedy called Make America Bake Again, just completed post-production and is entering the festival circuit.

In Sept 2020, Tijuana wrote, directed, and starred in The Corps, a political web comedy that lives between The Office and Veep about the White House Press Corps. Watch it at https://thecorpscomedy.com