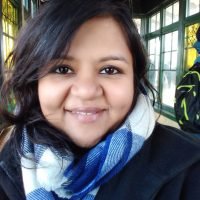 Born and raised in India, Sushma is a writer/director based in New York City. She writes stories that explore identity, freedom, and the myth of the American Dream. She is an active champion of intersectional feminist storytelling. Her work has been featured on NPR, BOMB Magazine, the Indian Express, and Platform Mag, among others.

Her short film ‘Anita’ premiered In Competition at the Venice Film Festival 2020 and has won several awards including Best Int’l Short at Dublin, The Gotham Award/Focus Features Student Showcase, the National Board of Review (NBR) Student Grant Award, and Best Film at Columbia University Film Festival.

Sushma is currently developing her first feature ‘Salt’ which is a recipient of the SFFilm Westridge Grant, was invited to the Torino Film NEXT Lab as well as to India's Film Bazaar.

Along with her professional practice, Sushma often mentors screenwriters at the Sundance Co//ab, a digital expression of the Sundance Labs and Festival.

Sushma is an alumna of the MFA Program in Screenwriting and Directing at Columbia University.