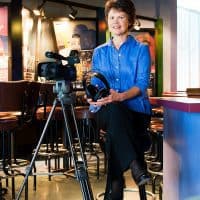 Three time Telly Award-winning filmmaker, Sue Vicory has been creating community-based films and projects within her not for profit production company, Heartland Films, Inc. since 2003. Her works include “Homelessness & the Power of One,” feature documentaries “One” and “Kansas City Jazz & Blues; Past, Present & Future” and short films “Absent” and “1898, The W.F. Norman Story. In 2015, she founded Team XX, an all female team of 25 filmmakers that created the award-winning film “Down Stage.” Vicory is a member of the LA based Alliance of Women Directors and creator of the website www.womendocumentaryfilmmakers.com to increase visibility for female filmmakers. Sue speaks on panels around the world representing Independent Women Filmmakers.
Sue's work can be seen at www.suevicory.com