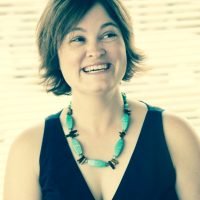 Stacey Davis is an award-winning filmmaker and entertainment lawyer. She made her directorial debut in 2019 with her dramedy short CHERRY and her short documentary PIE IN THE PUSS: A BRIEF HISTORY OF PIEING IN FILM. Collectively, the films screened at over 30 festivals, including DC Shorts. Her debut film, THE SIBLING CODE (wrote/produced) screened at over a dozen film festivals, including Nantucket Film Festival. Davis’ most recent production, A HAND TO HOLD, an animated short based on a poem written by Davis, premiered at the Brooklyn Film Festival and continues to screen on the festival circuit.

Davis’ most recent script, the political drama, THE PARTY, is in development. Her screwball comedy BURYING THE LEAD won Best Feature Screenplay at the Broad Humor Film Festival, and she has placed in the following competitions: Nicholl, Page (Top 25 in Comedy) and Austin. She has participated in Squaw Valley’s Screenwriting Conference, the Stowe Story Labs’ Narrative Lab and Writer’s Retreat.

In various producer roles, her films include JOCKEY (Sundance 2021); SWAN SONG (SXSW 2021); SWORD OF TRUST (SXSW, dir. Lynn Shelton). As an entertainment lawyer, she’s represented A24, Tadmor Entertainment and others on a variety of projects, including MINARI, DEATH OF DICK LONG, and I CAN ONLY IMAGINE. Davis serves on the boards of Sidewalk Film Festival and Stowe Story Labs.