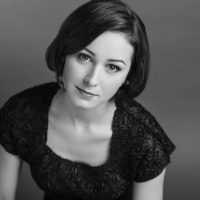 Sofia Streisand’s BIO:
Sofia's career path and her background provide a unique segue into the film business. She was born in St. Petersburg, Russia, and started working in theatre at the age of 14. She has worked virtually every backstage job. Her career developed quickly and by age 25, she had already produced and directed a number of theatrical productions in some of the most prominent Russian theaters. She then accepted a position to head the Production Department at the Mikhailovksy Opera theatre, the second biggest opera house in St. Petersburg. She has worked internationally in some of the most prominent theatrical venues including the Metropolitan Opera (NY), the LA Opera, the Mariinsky theatre (Russia), the Coliseum theatre (UK) etc. and has directed one of the best selling musicals in St. Petersburg ("Master and Margarita") as well as other successful shows. But when Sofia moved to Los Angeles she discovered a new passion - for filmmaking - and decided to start from scratch. She received 2 diplomas of excellency (Producing and Directing) at UCLA. Her short films "The Gift of the Magi" and "One twice a day" (written, produced and directed by Sofia) received immediate attention by the creative community and won multiple awards. In her free time Sofia produces and directs theatrical events of all kinds and scale.