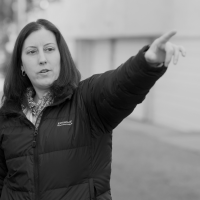 Sarah Smith is an award-winning filmmaker and television producer. Her latest short film, Black Hat, was an official selection of the 2019 Tribeca Film Festival and won the 2019 Iris prize. She is the co-creator and director of the web series Tender Touches, which won 1st place at the 2018 AT&T create-a-thon. Her previous short film, D.Asian, went on to screen at over 30 festivals across the globe, and was awarded the 2017 AT&T Underrepresented Filmmaker Award. In 2020, Sarah was named a semi-finalist for the HBOAccess Directing Fellowship. She has also won a WGA award as part of The Young & The Restless writing team. As winner of the 2019 Iris Prize, Sarah will direct her next short film Cardiff in Cardiff, Wales the summer of 2021. Sarah is a graduate of New York University’s Tisch School of the Arts.