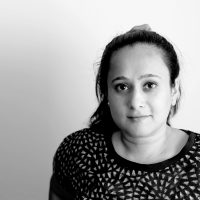 Prarthana Joshi also known as PJ was born and raised in India, graduated with a bachelor’s degree in Architecture. Her fascination for the stories the buildings and spaces narrated, led her towards her filmmaking career. She started working as an assistant director in independent features and short films in India. A first short film she directed, ‘Vaatsaru’, was screened at the International film festival of India. She was awarded a fellowship from the National Film Archives of India for her research documentary on Prabhat film company (a veteran film studios founded in 1929).

She moved to Los Angeles to pursue her master's degree in filmmaking in 2010. For more than a decade, she has been worked on short films, independent features, studio productions, web series, commercials, and high end music videos in different capacities. She produced a TV pilot, “Vicarious”, created by Jeffrey Brown (Henry Danger - Nickelodeon show) and Scott Speise (The Tick- Amazon Prime show), Directed by Mandy Fabian. It won best TV pilot at Dances with film festival along with other festival screenings and awards. She is currently developing and writing two features, attached to produce a feature in India. She continues to pursue her career as a director and also works as a line producer / creative producer collaborating with other directors.