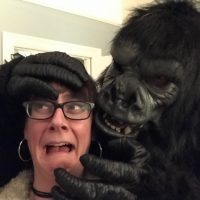 Nirvana Adams is a director who came up out of a poor, single-parent household in the Bay Area. She became a Script Supervisor after college and spent 18 years working on shows and movies of every genre, in what she considers the perfect “director-in-training” position. She utilized each job to glean every ounce of knowledge she could about all parts of production.

Nirvana took a year off to devote to pursuing directing. She produced and directed two (no-budget) shorts and she partnered with a producer to develop a feature film. Nirvana spent almost a year working on that project. Unfortunately, certain situations left it incomplete. Broke and in debt, Nirvana turned back to her job as Script Supervisor and got a job on American Housewife for ABC. She made her intentions clear: she would do a great job for them as Scripty, but her real desire was to direct. In season 3, she directed episode 321 “Phone Free Day” and then in season 4 she directed her second episode - 408 “Women in Business”.

Coming from production, Nirvana has worked closely with almost every single department and it is this experience that gives her a vital understanding of the collaboration needed to make a show successful.

Nirvana is an artist. Directing is her biggest love, but she keeps her creativity afloat writing, painting and doing metal work. She is passionate, caring, devoted and honest.