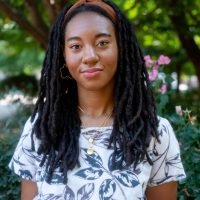 NATALIE JASMINE HARRIS is an emerging writer/director and producer from Maryland. She received her BFA in Film and Television from NYU's Tisch School of the Arts in May 2020.

As an artist, Natalie's creative work often exists within the coming-of-age genre, which she views as an essential tool to re-imagine liberation for young girls, the Black community, and LGBTQ+ individuals. Passionate about the intersections between filmmaking and social justice, Natalie worked for Elizabeth Warren's Presidential Campaign in 2019 and recently created a short documentary in collaboration with TIME Magazine and the Biden/Harris campaign.

Natalie is currently entering the festival circuit with her NYU thesis short film, "Pure," which received The Directors Guild of America's Student Film Award for Outstanding Directorial Achievement, presented to her by Regina King in February 2021. Natalie is simultaneously developing "Pure" into a feature-length script of the same name that she hopes to become her feature directorial debut. The feature-length film was recently awarded SFFILM Rainin Screenwriting Grant and selected to be a part of The 2021 Gotham Project Market and The 2021 Outfest Screenwriting Lab. The project is currently in Round 2 of the Sundance Development Track.

When she's not making films, Natalie loves to dabble in astrology, poetry, and baking.