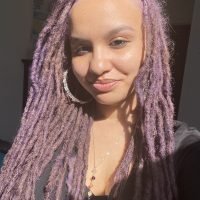 Natalie Cook is a filmmaker, poet, and theater-maker. Natalie’s poetry film, “Backwards God,” received the Best Social Justice Film Award at the New York International Film Awards and was the Grand Prize Winner of the AT&T Film Awards. She is the founder of Atlanta Word Works, as well as an alumna of the First Wave Hip Hop Theatre Ensemble, the BARS Workshop at The Public Theater, and the Gates Millennium Scholarship Program. She received a Bachelor in Arts in English with an Emphasis in Creative Writing and Afro-American Studies from the University of Wisconsin-Madison, and a Master of Arts in Film, Black Studies, and Art Education from the NYU Gallatin School of Individualized Study.