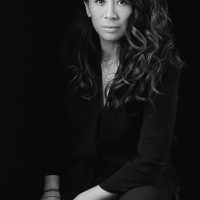 Director, producer, filmmaker, photographer, Leslie Alejandro has spent most of her life in the entertainment industry. Her career as a professional musician started at the age of 15 and continued for two decades. She then shifted her focus to publication as a partner/executive director at a celebrity/fashion magazine for seven years. Here she wore many hats - creative/art director, editor, photo producer. After several years of experience on many sets, Leslie eventually found her passion for being behind the camera. From this, she decided to pursue photography full time. Her work has been featured in Vanity Fair, Variety, GQ, Men’s Health, Vogue, Women’s Health, The Wrap, Nylon Magazine, etc.

Leslie’s existing obsession with film/television and her ability to story-tell through imagery, composition, and stills then led her to discover her passion in filmmaking. Her directing credits include the doc short about surrogacy She’s Having My Baby, the short film Smile, starring Kevin Alejandro, and Adult Night, starring Kevin Alejandro and Lesley-Ann Brandt.

Leslie actively campaigns and advocates for the inclusion, integration, and visibility of women and people of color "above and below the line" in the entertainment industry. She believes by exposing a variety of culture’s stories and experiences to the world, compassion and connection can be found.