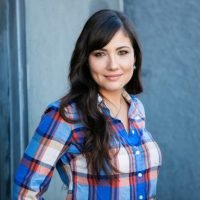 Lesley Demetriades is an award-winning film and television Director and Producer. She was born in Athens, Greece and grew up in Florida. She graduated from Florida State University and lives in Los Angeles.

A partial list of producing credits include: "Love Takes Flight" for Hallmark, "The Last Ninja" for the Discovery Channel, "Tiny House Nation” for the FYI Network, “Home Made Simple” for the OWN Network, “Fish Tank Kings” for NatGeoWILD, “Health Inspectors” for The Food Network, “Trucking Hell” For NatGeoUK, “Chasing Maria Menounos” for Oxygen, “Keeping Score", "Hella Gay" and "Lady Bits" for Fullscreen Media.

Lesley is a member of the DGA, PGA, SAG-AFTRA, and Alliance of Women Directors.