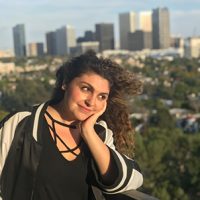 Kelly Sarri is an unconventional filmmaker, director, and editor based in Los Angeles, California with a helicopter view and a mission to convey meaningful stories through captivating visual and original aesthetic. Selected to judge at both Z-Fest and the Hollywood Film Festival, Sarri is considered a bold, right-brained creative with an inability to stay inside the box when confronting difficult topics. With 8+ years of dynamic experience, Sarri consistently delivers artful passion, precision, and persistence to portray the misunderstood.

She possesses demonstrated excellence in the Entertainment industry crafting and directing a wide variety of short films, documentaries, comedies and music videos reaching hundreds of thousands of viewers at dozens of major festivals across the globe. Equipped with a Master of Fine Arts in Film Production and fluency in English and Greek, Sarri activates her passion for film laced with social activism to empower women to own their story. Best known for her latest award-winning documentary, “Tax Evasion: A Greek National Sport”, Sarri expresses skillful motion graphics, content visualization, and title design that shocks audiences.