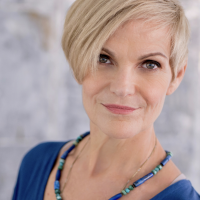 Originally from Sydney, Australia, Kaye has carved a niche internationally as a sought after director, performer, writer, and designer. Her directing career has garnered many awards globally, and her performing career has seen her headline some of the worlds biggest stage productions. She is currently producing and directing ‘Take your Seats’ a documentary about Broadways closure during 2020 and beyond, adapting ‘Tears on the Equator’ into a screenplay, and creating the pilot ‘The Wicked Cometh’. As a designer in Kenya, she was nominated for an African Academy Award for 'From a Whisper' other work can be seen in campaigns such as Nike Write the Future (Dir. Alejandro González Iñárritu, & Cinematographer. Emmanuel 'Chivo' Lubezki),and Nokia: Sub-Saharan Africa (Dir. Steve McCurry), features such as 'I am Slave', and numerous documentaries for Discovery, National Geographic and Raw TV. Kaye gained her degree at WAAPA - Perth (Alumni Hugh Jackman), and directing training at the prestigious NIDA - Sydney(Alumni Cate Blanchett). She has directed theater productions throughout Australia and Asia, and most recently has directed the films: “Black Canvas’ ‘Fragile', ‘Trumped’, ‘Nanas Room’, ‘Nil by Mouth’, 'Choice', ‘Famousland', 'On my Shoulder', 'JOE', ‘Coping’. As well as, multiple commercials, music videos, the Hawaiian Documentary ‘The Last Queen’. and Entanglement.