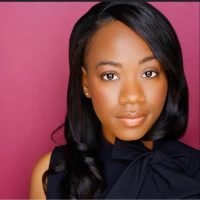 Kay is a writer/director born in Alabama to a Georgia musician and an Alabama seamstress. After graduating high school, she joined the Army National Guard which took her all over the U.S. as well as overseas. Simultaneously while serving her country, she graduated from the University of Alabama at Birmingham with a BA in Theatre before moving to Georgia. Upon moving to Georgia she completed a Production Assistant course through the Georgia Film Academy and immediately immersed herself into the Atlanta film industry. Although bringing stories to life is her passion and career-focus, she's also an actively licensed nurse, software developer, and an avid world traveler. You can find her collaborating on quality indie projects as well as studio projects as she continues to gain credits in the film and television world. Kay has been a fellow in both the Warner Media Veterans in Media Fellowship and the Writer's Guild Foundation Veterans Writing Project. Her projects have screened nationally and globally from the GI Film Festival in California, Big Apple Film Festival in Time Square, and global arenas in London and the Czech Republic.