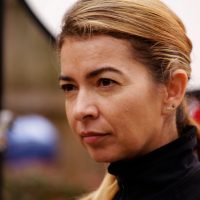 Jeannette Godoy is a first generation, Mexican American filmmaker. She comes to directing from an eclectic background, starting her career as a choreographer where she worked in film, television and commercials. She is most widely known for having choreographed the celebrated music video, Baby Got Back, by Sir Mix A Lot. She also choreographed the film, CB4, starring Chris Rock. Her initial foray into directing earned her a trip to Cannes for a commercial entitled, A Boy & His Tire. This spot for Bridgestone Tires was recognized for it’s beautiful visuals and subtle yet, emotional performance and received several prestigious nominations including the Young Director Award, as well as a spot in SHOOT Magazine’s New Director’s Showcase.
Jeannette lives in Los Angeles, with her husband, director, Jordan Brady and their twin 17 year old daughters. Her career mission is to tell stories about that uplift, engage and do something good for the world.