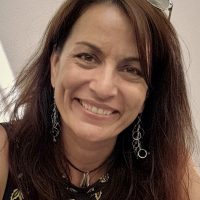 After receiving her BA in theatre and philosophy from Smith College, Indy moved to NYC and co-founded the all-new works theatre company DreamWeaver Productions. She produced and directed 5 seasons of shows off off Broadway including at Here Arts Center in Soho and American Theatre for Actors. As a young director, she was selected to participate in several emerging artist festivals and was reviewed in Backstage Magazine as “impressive” and “innovative.”

Moving to Los Angeles and a new path in the moving image, Indy directed her first short film “The Lesson,” which garnered international awards, including Best US Narrative at the Women’s International Film Festival in Miami. “The Hideout”, a dramatic short thriller written and produced by Indy screened at numerous festivals with honorable mentions and is now available on Amazon Prime.

As a cinematographer and DIT, Indy continued to develop her understanding of filmmaking and storytelling from some of the best in the world, working with Directors Ang Lee and David Lynch, and cinematographers John Toll, ASC and Rodrigo Prieto, ASC. She has worked on major Hollywood movies, television and documentaries. Her documentary work as cinematographer includes a short about educating the children of sex workers in Calcutta that aired on PBS, a f