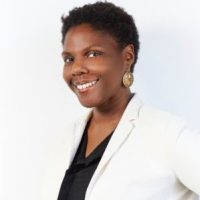 Gleana Albritton is a producer, writer and a reformed marketer having worked for many years as a digital media & marketing exec in the entertainment and technology space - including AMC Networks International, Twitter, A+E and fuse TV. In 2017 she launched her production company, Sisu Media Group to create, develop and produce content for and about women. "Walking The Dog While Black" #WTDWB is the first project Gleana directed, produced and co-wrote through her company, Sisu Media Group.

Most recently Gleana worked as a co-producer for the short film "Tinnitus" and producer on "Grounds" an award winning web-series written by playwright, Natalia Temesgen. She has also worked in various crew positions for Manns/Mackie Studios and Nina Holiday Entertainment. She's written about TV and pop culture for Metro NY, Levo League and CultureSonar. Gleana is also an Associate Programmer for the Bentonville Film Festival and is a member of the Television Academy, Women of Color Unite, and Digital Cinema Society.