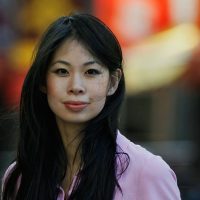 GEORGIA LEE is an award-winning writer and filmmaker. Georgia wrote and directed THE BIG DISH, a short film that caught the attention of Martin Scorsese, which led to a job as his on-set apprentice on GANGS OF NEW YORK. Georgia then wrote and directed her first feature RED DOORS which won the Tribeca Film Festival.

In television, Georgia has been a writer and producer on the CW’s THE 100 and on three seasons of Amazon’s THE EXPANSE. She has sold pilots to CBS, NBC, Fox, HBO, and Netflix. She created and will be show-running romance-drama THE PARTNER TRACK for Netflix and is also co-creating YA fantasy series SHADECRAFT with Joe Henderson for Netflix.

Prior to writing and directing, Georgia worked for management consultancy McKinsey & Company. She holds a BA in Biochemistry from Harvard University as well as an MBA from Harvard Business School.