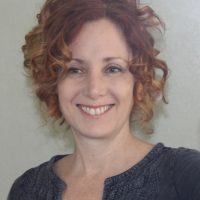 Known as an actor’s director, DANIELLE STALLINGS earned membership into Actors Equity Association in her teens. Storytelling and directing are in her DNA. While earning her BFA at USC’s conservatory theater program, she discovered disciplines that would profoundly shape her creative philosophy: Spolin improvisational games, devised performance and practicing Unity. This led to filmmaking and earning an MFA from Loyola Marymount University where she produced and directed a number of award winning films.

Specializing in surrealism, satire and sci-fi, Stallings' films include the beloved UP UNDER THE ROOF, based on the classic Manly Wade Wellman story. Her films have been selected for numerous prestigious festivals including The Bram Stoker Festival, The Sedona Film Festival, FantasyCon (Brighton, UK), The Savannah Film Festival, The Newport Beach Film Festival, The Museum of Science Fiction and Hall of Fame (Seattle), The Austin Women’s Film Festival and Sci-Fi London.

As a skilled producer and director, she currently holds the title of Assistant Chair at the Scottsdale School of Film+Theatre, and is a member of the Television Academy (Executives Peer Group). In 2019, she completed a 4-week residency at The Second City, Chicago and has completed The Second City Hollywood's Conservatory 1-3. Her current project is a comedy series developed at the PGA's Diversity workshop.

Up Under the Roof - TRAILER from Belle de Jour on Vimeo.