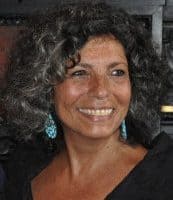 CHRISTINE LA MONTE, director/producer/writer and former film studio marketing executive (Disney, Universal, Orion,) is founder and president of La Monte Productions where projects in various stage of production/development include VIVA VERDI!, a feature documentary that she is producing/writing in Milan; JUSTICE DEFERRED a film based on the critically acclaimed legal thriller, by Len Williams; and THE OTHER SIDE OF 90, a documentary that she is directing, writing and producing. She produced the award-winning short film, DANDELION DHARMA; the Gary Goldstein scripted play, “Three Grooms & A Bride” at the Coast Playhouse in Los Angeles, and was a producer of the syndicated television talk show, “Marilou” starring Marilu Henner. Her directing credits include the Screen Actors Guild’s “A Heart United” with Sharon Lawrence and Jo Beth Williams, and “The Angina Monologues” with Brenda Strong and Eric Close. A Contributing Editor of Musée Magazine, a digital avant-garde photography magazine, La Monte, is a member of the Academy of Motion Pictures Arts & Sciences, the Academy of Television Arts, and a past faculty member of New York’s School of Visual Arts, where she initiated The Dusty Awards, an on-going annual film festival/award ceremony of student short films; she has guest lectured at UCLA and USC. She divides her time between LA and Rome with her author husband Len Willia