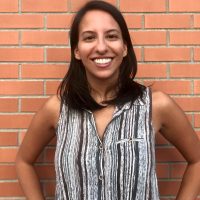 Christina Raia is a New York City based Writer/Director and the Founder of CongestedCat Productions. With an affinity for ensemble pieces and punchy dialogue, she tends to focus on character-driven narrative projects that explore social structures through humor and horror. Her work, consisting of over a dozen short films, a web series, and two feature films, has screened at film festivals around the world with coverage on press outlets such as Indiewire and BuzzFeed. Through a desire to support other filmmakers, she teaches workshops on crowdfunding and creative distribution methods, empowering creators to build their audience and get their work made and seen. She also runs IndieWorks, a monthly screening and community-building series showcasing short films by other New York filmmakers. She was a selected fellow in the Artist Academy of The Film Society of Lincoln Center as part of the 2018 New York Film Festival; and she won the Lois Weber Pioneer Award for her leadership in film at the 2019 Queens World Film Festival. She's currently beginning development for her third feature, Silent Night; the screenplay for which was a quarter finalist in Slamdance's 2016 Screenplay Competition. Find Christina on social media: @craia9.