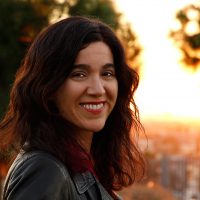 Rebecca Louisell is a director with an arts background in music, fine art photography and mixed media. Before returning to graduate school for production in cinematic arts at the University of Southern California (USC), Rebecca worked with young people in a variety of settings teaching outdoor education and policy advocacy. While at USC, Rebecca established herself as a filmmaker with a mission to make media that matters, directing shorts about young women falling out of love, a woman dealing with chronic illness, and a friendship that borders on romance between a Caucasian straight girl and an African American genderqueer teenager. Her MFA thesis film Genderfreak premiered at Outfest and showed at thirty festivals worldwide, winning awards at the Los Angeles Transgender Film Festival and Translations: the Seattle Transgender Film Festival. The short then went into distribution on cable, through multiple streaming platforms and is now in over 3000 schools in the United States, Canada and Italy. Recent projects have included directing an episode of The Pantheon web series and directing and co-producing the web series LA Picker, now streaming on Seed & Spark’s platform streaming service. Rebecca is currently working with longtime friend and collaborator Elizabeth Yarwood to develop her first feature film, Tomas and Ines. Rebecca lives in Koreatown with her wife and two cats.