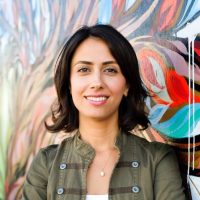 Bita Shafipour is a multicultural, BAFTA nominated writer, director and producer based in Los Angeles. She is developing her first feature film with producer Mark Amin at Sobini Films. Bita's latest narrative film LAST NIGHT IN EDINBURGH (2015) was shot in Scotland and premiered at Palm Springs ShortFest. It was nominated for several awards and won the BAFTA New Talent Award for Best Actress, Best Director Award at Seattle Short Film Festival, Best Narrative Film Award at The Global Cinema Film Festival Boston and The Vanya Exerjian: Empowering Women and Girls Award at Socially Relevant Film Festival NY.
She is directing and producing an experimental style documentary on the work of veteran analog photographer, Hadi Salehi, with Emmy Award winning producer Chris Boyd.
Born in Iran, Bita has worked on three continents, making films that aspire to influence positive social change and tell the stories of women and immigrants from a fresh perspective. Bita is a member of BAFTA, IDA, Alliance of Women Directors and Film Independent. She has taught Film Production Management at Edinburgh Napier University and Directing at UCLA Extension. She is currently a lecturer at USC’s School of Cinematic Arts where she got her BA in Cinematic Arts in 2005.
She is inspired by her son, nature and the kindness of people around her.