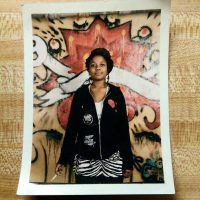 Monika Estrella Negra is a DIY oriented filmmaker, writer, activist and punk rock organizer from Milwaukee/Chicago, respectively. Her first short titled "Flesh" is about female serial killer navigating the Chicago DIY (do-it-yourself) punk scene (of which was included in the ‘Horror Noire’ syllabus).

She has directed three additional shorts, ‘They Will Know You By Your Fruit’, ‘Succubus’, and the in production ‘Bitten, A Tragedy’. A writer, a nomadic priestess, spiritual gangster and all around rabblerouser - Monika has written essays for Black Girl Nerds, is the author of a zine series (Tales From My Crypt), the creator of Audre's Revenge Film and Black and Brown Punk Show Chicago, a 2018 Leeway Foundation Art and Change Grantee.

While horror makes up the majority of Monika's work, she has eyes on creating more genre films with QTIBIPOC at the focal point of her stories. The theory of visibility equating representation has proven erroneous within the film community, thus giving inspiration to the birth of Audre's Revenge Film, a collective created by Monika in 2016. Named after the Black Lesbian Intellectual, Audre Lorde, the collective holds a vision of uniting Black women, Black LGBTQA and People of Color under an umbrella of creativity and liberation.