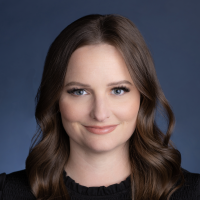 April Moreau is a writer and director with a passion for female-driven stories. She is an alum of the AFI Directing Workshop for Women and holds a BFA in Acting from the University of Michigan. She has also studied TV Writing at UCLA Extension and improv and sketch comedy at Groundlings and UCB.

April’s filmmaking career began in the world of digital shorts, with her work being featured on the homepage of Funny or Die and Elizabeth Banks’ WhoHaha. In 2018, she directed the short film, BITCHES BY THE SEA, which screened in Paul Feig’s shorts contest at the Women in Comedy Festival, presented by HBO. Her subsequent film, RIDE IN PROGRESS, premiered at the Santa Barbara International Film Festival in 2020. In the early days of the COVID-19 lockdown, April co-wrote and directed the feature film, AMY & PETER ARE GETTING DIVORCED, which was distributed by Gravitas Ventures. Her upcoming film, Hysterical, will premiere at the Oscar-qualifying Florida Film Festival.

April serves as the co-President of the University of Michigan Entertainment Coalition and is a proud member of the Alliance of Women Directors.