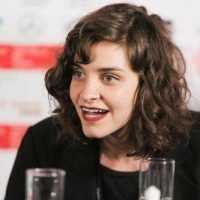 Amanda directs comedy. Her second feature, ASKING FOR IT, about a journalist who seeks vigilante justice when her internet stalker runs free from the law, stars Stephanie Hsu (MARVELOUS MRS. MAISEL) and Janeane Garofalo (WET HOT AMERICAN SUMMER) and premiered at the Woodstock Film Festival in October, 2020. The broadcast premiere, via Fuse TV, was in August, 2020. Her first feature, PINSKY, a dark comedy about a queer, first-generation slacker, premiered at the Moscow International Film Festival, won “Best Narrative Feature” at the Santa Fe Independent Film Festival and was distributed by Breaking Glass Pictures in 2019. Both features are currently streaming on Amazon Prime.

Amanda is a member of Film Fatales, AWD and is training with IDC to become a certified intimacy coordinator. She is a queer, feminist filmmaker, committed to gender and racial parity in the film industry and believes that self-representation and inclusive collaboration makes for stronger and transformative storytelling.