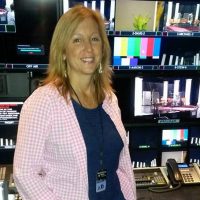 ADRIANE ADLER has directed a diverse slate of shows from daytime and late-night talk to culinary, news and drama broadcasts. Adler began directing Food Network's hit, THE KITCHEN, in 2015 and garnered Best Director Emmy nominations in 2018 and 2019. A culinary talk show with four hosts, along with celebrity guests, the show is shot on indoor and outdoor sets, and includes a variety of demos, games, performances, contests and integrations.

In 2019, Adler launched and directed Sony Pictures Television's THE MEL ROBBINS SHOW, a syndicated daily talk that show aired through fall 2020. She teamed up with the renowned motivational speaker/author, Robbins, as she engaged her audience through various unique demos and interviews on set in NYC.

In 2018, Adler was tapped to launch and direct Facebook's AFTER AFTER PARTY, a single season late-night talk show shot on location in a Manhattan loft. Host/comedienne Sonia Denis welcomed celebs, comedians and party guests to join her in discussing the topics of the day and to engage in various games.

Adler has also directed news specials for PBS, including AMERICA AFTER CHARLESTON, hosted by the late Gwen Ifill.