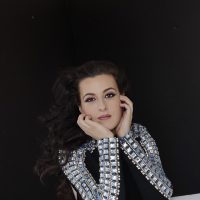 Adriana Dushaj has been working in the film industry since she was a teenager. She became a published author at the age of 14 and starting directing her own films shortly after. She wrote, and directed a narrative short film "Humanette" that went on to be accepted into many well-known Film Festivals.

After working at "MTV", "Funny or Die" and worked as a Talent Agent for 3 years Adriana then decided to pursue her dream in opening her own Production Company One Damaged Dame LLC.

"One Damaged Dame Productions employs the world’s best media professionals to take your creative projects to the next level. From innovative films to provocative music videos, that take small ideas and turn them into truly amazing works of art."

Adriana Dushaj likes to create films that help others in a deeper level. From directing a film that focused on domestic abuse, to her new film that is tackling on suicidal awareness. Adriana’s film goals are more then just for entertainment, they’re to gain awareness.