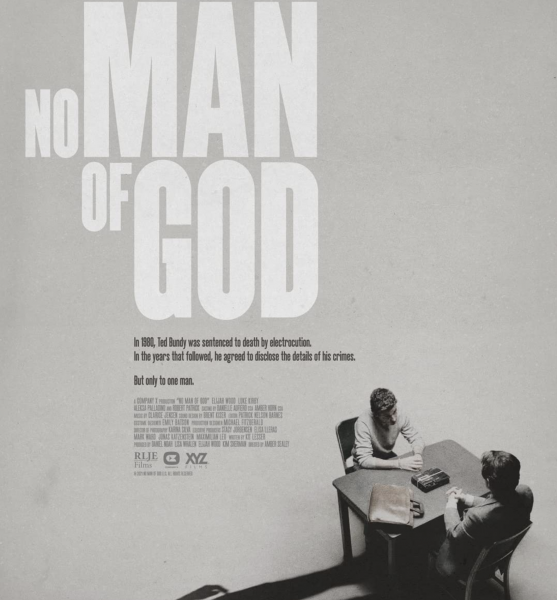 No Man of God, a feature film directed by AWD Member Amber Sealey, was released in theaters and on digital platforms in the US on August 27th by RLJE Films. The film, which premiered at the Tribeca Film Festival in June, explores the complicated relationship that formed between FBI analyst Bill Hagmaier and serial killer Ted Bundy during Bundy’s final years on death row. Critics have praised the performances of Elijah Wood (Hagmaier) and Luke Kirby (Bundy), as well as the way the film refuses to revel in the gore of Bundy’s crimes.

Sealey chatted with AWD about the making of the film, working with the actors, and crafting a world that doesn’t dismiss the victims in favor of glorifying Bundy.

AWD: The Bundy murders are normally approached as a male story created by male filmmakers, however, all of the Bundy victims themselves were female. How did you approach making NO MAN OF GOD from a different perspective?

AS: I don’t know that it’s often conceived of as a male story, but certainly the story is usually told by men. I think I’m only the second woman to make a film with Bundy in it and there have been 22 projects (including docs) that include Bundy. And certainly if we’re going to talk about the experience of being a victim of violence like this, that very much is female territory. It’s mostly women who know what it’s like to walk down a dark street and hear footsteps behind you and get scared. This movie is not about the victims, but it was important to me that they be represented in some way that was not dismissive or saccharine.

Ted Bundy is a name we all know, while Bill Hagmaier is far less known. Did you find yourself approaching the respective actors, Luke Kirby and Elijah Wood, in different ways?

It was important to me that this be a little bit more of a movie about Bill than it was about Bundy. I think we have more to discover and know about people like Bill than we do about Bundy. Not that there wasn’t more to share about Bundy too — there was from my perspective — but I wanted it to explore Bill at least equally. In terms of approaching the actors, no, I approach them as I do all actors. No matter what the role, I always approach from a place of openness.

True Crime and Serial Killers are ever popular subjects for audiences, however, many times the work itself can glorify the perpetrators and lose sight of the victims. Was there any work or research you did in pre-production about the victims that helped inform your direction of the film?

I think it’s possible for two things to exist at once — we can be interested in serial killers and also be aware that our interest in them might be bad. The truth is that we are in a business that has to go where the interest is; we make films about things that we think people will be interested in. I also think the interest in true crime doesn’t necessarily come from a bad place — some of it comes from a very human interest in other humans and a worry about them being in pain. It’s like rubbernecking on the freeway, we look and think, “Oh god what happened to them? I hope they are okay!” We are not looking thinking, “Wow I hope I see lots of gore and pain!” and I think the interest in this genre has overlap with that. Some of the best people I know are horror and thriller genre folks. And I think it’s possible to be interested in those kinds of films and also be aware that sometimes the interest dips into glorification and we need to be cognizant of that and work against that. I guess that’s what I was trying to do with No Man of God.

Did your approach to filming the movie have to change at all because of the pandemic? How did you overcome the new restrictions put into place?

We were in prep in March of 2020 when we got shut down because of the pandemic. We then had the summer to try to figure out how and when we could safely film. By August the White Papers and Safer Way Forward from the Unions were out and we felt like there was a blueprint we could follow to keep everyone safe. So we filmed in LA in September of 2020 and I’m really proud that we had no positive cases during our shoot. The PPE and testing obviously ate a lot of our budget up, but that wasn’t a sacrifice to make really because the most important thing was keeping all our crew and cast safe. So, yeah, we had to make changes and tighten our belts in lots of areas but we were all so happy to be back at work and making this film and seeing other humans again we were glad to do it.

What lessons from the making of NO MAN OF GOD will you take with you into subsequent work?

I think every movie is its own beast and you learn something from every job, about the work and also about yourself. Those lessons are hard to put into words, sometimes they are just feelings, elusive thoughts, or a friendship. I became close with everyone on NMOG and those relationships will come with me and I’m so grateful for all the wonderful people I met and got to work with and see their brilliance.

Check out No Man of God in theaters or on digital today!

Amber Sealy is an award-winning filmmaker who has been supported by Sundance, Film Independent, Women In Film, Ryan Murphy’s Half Initiative, NBCUniversal Directors Initiative, WeForShe DirectHer, and is a fellow of the AFI DWW. Her films include NO MAN OF GOD (SpectreVision/Company X/RLJE), NO LIGHT & NO LAND ANYWHERE (Factory 25), HOW DOES IT START (Sundance ’20), HOW TO CHEAT (FilmBuff/Cinetic), and A PLUS D (IndiePix). She is attached to direct THE EDUCATION OF SHELBY KNOX (OCP/Act 4 Ent/Double Nickel/Neal Baer).