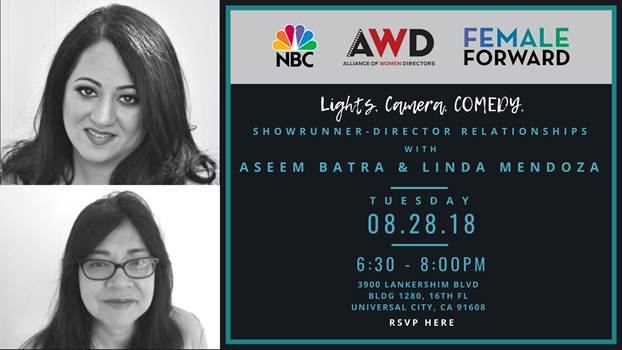 As previously announced, AWD and NBC have partnered to present a set of master classes for emerging women episodic directors. The third of these classes will explore the SHOWRUNNER-DIRECTOR RELATIONSHIP with Aseem Batra & Linda Mendoza.

Join us for a focused workshop on what to expect when working with a showrunner as a guest director on a television show. At this small group workshop, Aseem and Linda will discuss how the Showrunner and Director work together to produce an episode of television. Each attendee will leave with insider tips on how to navigate that relationship successfully.

Aseem Batra is a comedy writer based in Los Angeles. She grew up in Baxley, Georgia before settling in California. Aseem attended the University of California, San Diego, then obtained her graduate degree at University of Southern California. She began her television comedy writing career on the show “Scrubs,” where she also played the role of squeaky-voiced intern, Josephine. Batra then joined the writing staff for Seth MacFarlane’s “The Cleveland Show,” and provided the voice for the character Kendra Krinkelsac. In 2012, she signed a first-look deal with NBC and Universal Television, where she’s worked on several comedy series including “Bad Judge,” “Marlon,” and “AP Bio.” She recently created the family comedy “I Feel Bad,” which was picked up to series by NBC. The show is executive produced by Amy Poehler and Julie Anne Robinson, who also directed the pilot. Based on the book “I Feel Bad. All Day. Every Day.” by Orli Auslander, it stars Sarayu Blue.

Linda Mendoza was born and raised in Detroit, Michigan.  She attended Wayne State University as a Sociology Major before entering into the television and film industry. She started in television in the multi-camera/variety genre as a production assistant. She became the Production Supervisor on hit shows such as “In Living Color” and “Saturday Night Live.”  Linda worked her way up, the old fashioned way with lots of long hours and very little sleep. “The Chris Rock Show” for HBO would help her transition to full time directing. She was one of the house directors on “The Bernie Mac Show” and has been working in narrative television for over 15 years, directing such shows as “Brooklyn 99,” “Blackish,” “Kimmy Schmidt,” “Superstore,” “30 Rock” and “Scrubs” to name a few. She is currently working on “The Good Place” for NBC and “One Day at a Time” for Netflix. She has been a member of the DGA since 1987.

PLEASE NOTE: For this limited seating workshop, tickets were allotted to AWD members via a lottery system. The workshop is currently full.