“The Post Process: Delivering a Story” with Nancy Forner and Julie Herlocker 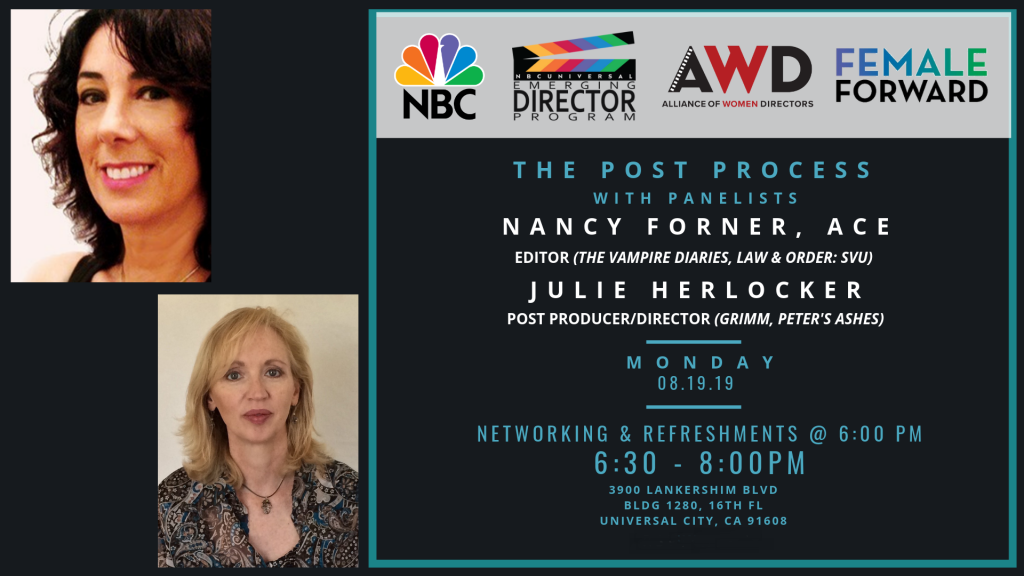 Our 5th 2019 workshop with NBC will be The Post Process: Delivering a Story with Nancy Forner and Julie Herlocker. The hosts will discuss the process of post-production on an episode of television, focusing on director and editor relationship and communication.

The workshop will be moderated by our CM Landrus, Board Member of Alliance of Women Directors.

ABOUT THE INDUSTRY GUESTS:

Nancy Forner, ACE
Since the moment Mel Brooks promoted her from Assistant Editor to full Editor on the movie SOLAR BABIES, Nancy has been busy picture editing movies and television series. During her career she has worked on many notable and diverse projects in genres and styles that range from comedy, horror, action/adventure, fantasy and medical/legal procedurals. The award-winning Buffy the Vampire Slayer, Law & Order: SVU, The Vampire Diaries, Witches of East End and the cult classic RETURN TO HORROR HIGH, are a few, but not all, of her many and varied credits.

Nancy is a member of IATSE Local 700 and also a proud member of the American Cinema Editors, ACE.  One of the mandates of the American Cinema Editors is to “further the understanding of the art of editing.” To that end, Nancy has been highly involved with mentoring and internship programs for aspiring film students and a Professor of Editing at USC School of Cinematic Arts.Nancy is the Editing Track Head for the Division of Film & Television Production and holds the Michael Kahn Endowed Chair in Editing.

Julie Herlocker transitioned to directing after a successful career as a highly sought-after post producer on high profile one-hour dramas. She learned the craft of storytelling from some of the best, working in cutting rooms, color bays, in ADR, scoring stages and on dubstages for shows including MILLENIUM, THE WEST WING, Steven Spielberg presents TAKEN, SKIN, LAS VEGAS, GRIMM and DIETLAND.

After directing the award-winning short film PETER’S ASHES, Julie was the only crewmember in 123 episodes to earn the opportunity to direct on NBC’s Grimm. Julie recently directed 7AM WEDNESDAY, a short thriller she co-wrote and produced, which is set for a late August 2019 release. The next project she’ll lens is a thriller with a touch of horror, that she’s co-written, set to start shooting in early September 2019.

Attached to direct the feature STRINGS and the pilot for the television project Solanna, Julie was recently selected as an emerging director for the DGA’s 2019-2020 Mentorship Program within their Director Development Initiative.

PLEASE READ: Due to the limited seating, slots will be allotted to AWD members via a LOTTERY. To have your name entered, starting Monday, August 12th at 1oam, please sign up via below WITH YOUR LEGAL NAME (the one on your driver’s license) by EOD Tuesday, August 13th. Participants will be selected via a random sorter app. Everyone will be notified of their status by EOD Wednesday. Participants will receive exact location and parking instructions at that time.