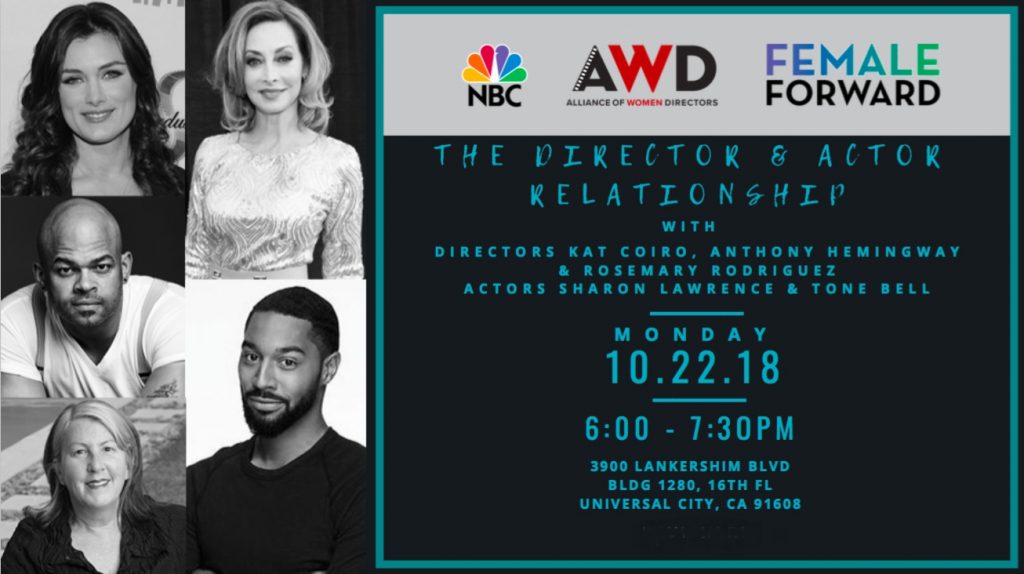 As previously announced, AWD and NBC have partnered to present a set of master classes for emerging women episodic directors. The fourth of these classes will be The Director & Actor Relationship with Kat Coiro, Anthony Hemingway, Rosemary Rodriguez, Sharon Lawrence & Tone Bell.

PLEASE NOTE: For this limited seating workshop, we will be allotting tickets to AWD members via a lottery. To have your name included, you must RSVP via by logging into the website and RSVPing for a lottery ticket by END OF DAY Thursday, October 18th. This is to have your name included for the lottery ONLY. Names will be run through an app and everyone will be notified on Friday, October 19th as to who will be attending. PREFERENCE WILL BE GIVEN TO THOSE MEMBERS WHO HAVE NOT YET ATTENDED AN NBC EVENT.

KAT COIRO
As a director, Kat is attached to direct Jennifer Lopez’ upcoming feature “Marry Me” and the pilot “Richard Lovely” for 20th century and FBC.  Her most recent television projects include Netflix’ upcoming “Dead To Me”, “Modern Family”, the pilot for the new series “Florida Girls”, “Shameless” and the current season of “Always Sunny In Philadelphia”.  Other television credits include: “Daddy Issues” pilot, “Mozart In The Jungle”, “Brooklyn99” and “The Mick”.

Additionally, Kat has written, directed and produced two theatrically released features including TriBeCa favorite, ”And While We Were Here” (which she shot in 11 days for 150k while 8months pregnant). Her commercial clients include Coke, Nutrish, Snuggle and Coldwell Banker, among others. She has also sold a few network pilots (as a writer).

Kat attended boarding school at Interlochen Arts Academy in Northern Michigan, received a BFA from Carnegie Mellon University, in theater and Russian History, and studied directing at The Moscow Art Theater, Russia.  She was enrolled as a fellow in the Masters program at The American Film Institute but dropped out to shoot her first feature.  Coiro currently teaches a course every summer at Interlochen Center For The Arts.

Kat was a fellow in the 2016 NBC Universal Television directors initiative.
Kat is a member of Film Fatales LA
Kat is registered at Free The Bid for women in advertising.

Kat currently resides in Los Angeles with her husband, actor Rhys Coiro, and their three children.

Hemingway graduated from E.A. Laney High School in Wilmington, North Carolina and soon became the youngest Second A.D. in the Directors Guild of America at the age of 19 and then the youngest First A.D. at 22 in 1998. Hemingway quickly rose through the ranks, achieving his directorial debut on the universally lauded fourth season of HBO’s “The Wire.”

Since then, Hemingway has been in constant demand and has directed episodes of some of the hottest shows on both network and cable television including “Battlestar Galactica,” “Power,” “Empire,” “Glee,” “The Newsroom,” “Orange Is The New Black,” and “American Horror Story,” as well as his feature debut, blockbuster film Red Tails, inspired by the heroic Tuskegee Airmen – the first African-American fighter pilots in U.S. military history.

Today, Hemingway stands not only as one of the most preeminent directors in the industry, but one of television’s go-to visionaries.

In 2018 Hemingway launched his eponymous production shingle ANTHONY HEMINGWAY PRODUCTIONS. Under the direction of this visionary, AHP will be a cultural incubator and an intergenerational connector; fueling the creation, development, and production of innovative, inspiring, and provocative film, television, and digital content.

After that, Rosemary was accepted into the John Wells Women and Minority Fellowship, where she began directing television. Her episodic TV work includes The Walking Dead, Jessica Jones (Marvel/Netflix,)  The Tick, Sneaky Pete, The Good Wife (18 episodes, including the 100th), Rescue Me and Sex&Drugs&Rock&Roll. Rosemary was Producer/Director on Jason Katims‘ new show Rise.

Her features in development include Loose Girl, based on the best-selling memoir by Kerry Cohen, produced by Fred Roos; Grandma’s Shoes from Poland, produced by Arthur Sarkissian.

SHARON LAWRENCE
You may know her from multiple nominated and SAG Award winning portrayal of ADA Sylvia Costas Sipowitz in NYPD Blue, as a stay-at-home prostitute in Desperate Housewives and a murderous realtor on Monk, as a serial killer on Law and Order:SVU, coming to terms with her long lost daughter on Rizzoli & Isles, bantering with Alfred Molina on Ladies Man or beating up Larry David on Curb Your Enthusiasm. Sharon grew up in Charlotte and Raleigh North Carolina, graduated form UNC-CH with a degree in Journalism and spent her college summers doing musicals in summer stock. She became an Actors Equity Member in 1984 and a SAG-AFTRA member in 1987.

Recent work includes Blunt Talk opposite Sir Patrick Stewart and an arc on NBC’s upcoming series Game Of Silence. Recent film includes Solace opposite Sir Anthony Hopkins, Of Music and Mind with Joaquim De Almeda and Aunjanue Ellis and award winning The Bridge Partner with Beth Grant. An accomplished stage actress, Sharon played twenty different women in the Coward cabaret Love, Noel at the Wallis. At the Pasadena Playhouse she starred in Noel Coward’s final play, A Song at Twilight and as Vivian Leigh in Orson’s Shadow -(Ovation nomination, winner LA Drama Critics Circle Award). At the Taper she created the role of Maureen in the premier of Theresa Rebeck’s Poor Behavior and was featured Carl Reiner’s gala Enter Laughing. Broadway credits include Cabaret, Fiddler On The Roof and as Velma Kelly in Chicago. Former Chair of Women In Film Foundation; serves on the Board of Directors of the SAG-AFTRA Foundation, WeForShe.org, HealTheBay.org and UNC-Chapel Hill General Alumni Association Twitter-@sharonlawrence

TONE BELL
Tone Bell will next be seen starring opposite Nina Dobrev in CBS’ new prime time comedy entitled FAM. The show focuses on what happens when a woman’s dreams of an upstanding life with her new fiancé and his upstanding family are dashed after her younger train wreck half-sister comes to live with her to escape their train-wreck of a father. The show was created by Corinne Kingsbury, Aaron Kaplan is producing.

Tone Bell can also be seen whenever and wherever you want starring opposite Kathy Bates on Netflix‘s original comedy series DISJOINTED. Previously Tone starred on the half hour comedy series TRUTH BE TOLD, BAD JUDGE and WHITNEY for NBC An accomplished stand-up who tours regularly nationwide, Tone shot his one hour comedy special which will debut on Showtime. He is currently developing a show at FX based on his comedic observations on contemporary issues surrounding “schisms” in this country. His half hour comedy special can currently be seen on Comedy Central and cc.com.

Next year Tone can be seen starring opposite Vanessa Hudgens, Rob Corddry, and Adam Pally in LD Entertainment’s DOG DAYS. Tone plays Jimmy, a former NFL player-turned-TV host looking for more in his life and relying on his furry friend for support.

Tone is originally from Atlanta and currently resides in Los Angeles.