This Sunday our guest will be AWD member and American Society of Cinematographers President’s Award winner Nancy Schreiber. Moderated by Emeritus Board Member Maria Burton, the discussion will focus on “Creating the Look: From concept to production.” Nancy will walk us through her process creating lookbooks for the Starz series P-Valley (2020) and film Mapplethorpe (2018)

SUNDAY TEA with AWD is free for members. The general public can purchase tickets via this EVENTBRITE link. 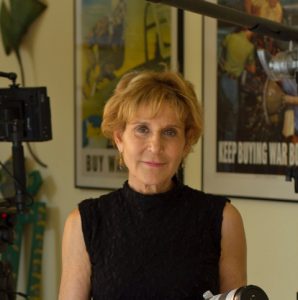 NANCY SCHREIBER is an award-winning cinematographer based in both New York and Los Angeles. She was the fourth woman ever voted into membership in the prestigious American Society of Cinematographers.

Schreiber was honored with the Best Dramatic Cinematography Award at Sundance for the film November, directed by Greg Harrison starring Courteney Cox. She also shared the Best Cinematography Award at Sundance for My America…Or Honk If You Love Buddah and she garnered an Emmy nomination for Best Cinematography on the acclaimed Celluloid Closet for HBO. In addition, Schreiber was nominated for an Independent Spirit Award for Chain of Desire and was recognized  by Variety magazine as one of 10 DPs To Watch.

Schreiber’s work in television is currently being seen on Shondaland and ABC’s STATION 19.  Previously her work was seen on ABC’s The Family with Joan Allen and Alison Pill, and the FX show, Better Things, staring Pamela Adlon. She also was the Director of Photography on the HBO series, The Comeback, with Lisa Kudrow and set the look for pilots such as In Plain Sight, for USA Network.

Schreiber taught advanced cinematography at the American Film Institute in 2010-2011 and has guest lectured at all the film schools in New York, San Francisco and Los Angeles. She also served on the board of the ASC for seven years, was on the foundation board of Women In Film, is a huge supporter and member of Film Independent, IFP and IDA, and is a member of the Academy of Motion Picture Arts and Sciences. Her cinematography will soon be seen on Starz’ P-Valley, airing June 2020.