This Sunday our guest will be Showrunner/Producer/Director I. Marlene King. AWD Advisory Board Member LeeAnne Stables will talk with Marlene about her career and advice for directors.

SUNDAY TEA with AWD is free for members. The general public can purchase “pay what you can” tickets via this EVENTBRITE LINK. All donations go to support the Alliance of Women Directors (AWD) and its professional development, craft enrichment, and peer-to-peer support programs. For over two decades, AWD has been advocating for and advancing the careers of women, women identifying, and non-binary directors to create a permanent shift in how Hollywood brings its magic to screens big and small. 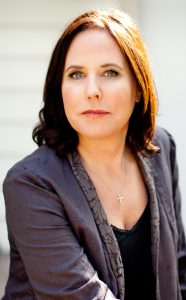 I. Marlene King is an American writer, producer, and director – best known for helming the 7-season run of the hugely successful television series PRETTY LITTLE LIARS (2010 – 2017), based on the international best-selling books by Sara Shepard.

In 1995, King launched her debut project in the Young Adult genre with the release of her coming-of-age film NOW AND THEN starring Demi Moore, Melanie Griffith, Rita Wilson and Rosie O’Donnell and newcomers Christina Ricci and Gaby Hoffman. The film was loosely based on Kings own experience growing up in suburban Indiana and now 25 years later since release, the film maintains a loyal, cult audience fan base.

Under Kings leadership as show runner, PRETTY LITTLE LIARS became a social media phenomena with still-standing industry records of 100 million tweets from show viewers, and highest tweets of any TV series finale episode-1.4 million, and remains “the most social show” in television history. The “live tweeting” from PLL fans and direct social media engagement encouraged by King and her cast led the series to cult status winning 3 Peoples Choice Awards for Best TV Drama and 6 Teen Choice Awards over its long run.

Over her career Ms. King has earned industry prominence as a multi-hyphenate writer/director/showrunner producing in addition to PRETTY LITTLE LIARS other television series including FAMOUS IN LOVE, RAVENSWOOD, and PRETTY LITTLE LIARS-THE PERFECTIONISTS.  Her film writing credits since NOW AND THEN, include scripts as diverse as NATIONAL LAMPOON’S SENIOR TRIP (New Line Cinema), JUST MY LUCK (20TH Century Fox) and IF THESE WALLS COULD TALK (HBO). Ms. King and her Long Lake Media team are currently developing material in all genres telling the stories and experiences of women of all backgrounds and ages.

A mid-west native, Ms. King is a graduate of Pepperdine University in Malibu, California.  In addition to managing her busy production company, Ms. King actively supports political and social justice causes through the Rosenthal-King Family Foundation with her wife, attorney Shari Rosenthal. They live in Los Angeles, with their two sons Emerson and Atticus, three crazy dogs and one bearded dragon.