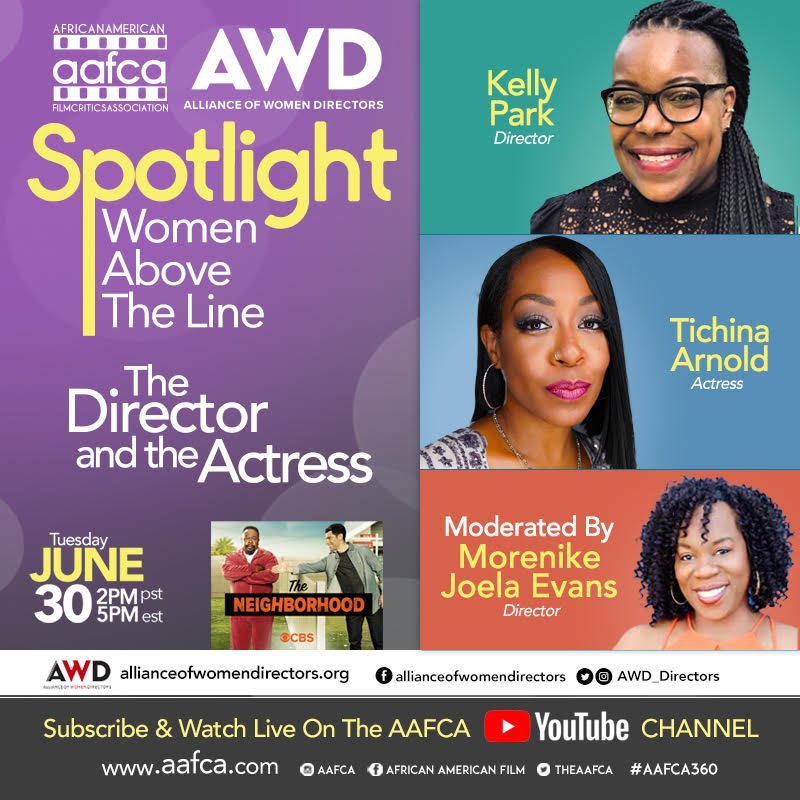 AWD is pleased to announce the first of a series of conversations in partnership with the African American Film Critics Association (AFFCA). Join us for this talk with director Kelly Park and actress Tichina Arnold moderated by director and AWD member Morenike Joela Evans about carving a path as a black woman director in Hollywood.

KELLY PARK has booked her first pilot and has also become one of the first black women to direct a CBS Sitcom, having directed episode 17 of the second season of the hit CBS show THE NEIGHBORHOOD starring Cedric the Entertainer and Max Greenfield for Kapital Entertainment.

The pilot – COUNTRY COMFORT for Caryn Lucas (MISS CONGENIALITY) and Netflix – is scheduled to shoot in February 2020. It will star Katherine McPhee as an aspiring and talented country singer who loses her job, her boyfriend and her home. The heartbroken mess suddenly finds herself the unlikely nanny for a widower (Eddie Cibrian) and his five kids, bringing music and love back into their lives after the country music singing family loses their mother.

Kelly Park began her career in Hollywood as a comedic actor, spending her days studying her craft at Second City Improv Theatre and The Groundlings, immediately landing commercials, short films and sketch comedies. This eventually led to teaching children and young adults the fundamentals of acting and improv. Kelly quickly became one of the most sought-after acting coaches in television, working on numerous pilots and television shows for Nickelodeon, Disney Channel, Amazon, and Netflix. From there, Kelly transitioned to Director, where she has directed multiple episodes of the Emmy Award- nominated Netflix show, ALEXA & KATIE. Additionally, she recently directed multiple episodes of the MAD ABOUT YOU revival for Spectrum, as well as new Netflix’s series- TEAM KAYLIE, THE EXPANDING UNIVERSE OF ASHLEY GARCIA, FAMILY REUNION amongst others.

TICHINA ARNOLD is from Queens, New York. She discovered her penchant for entertainment when she was four, in a performance for her family’s church congregation.

Arnold’s breakthrough role in the International Blockbuster LITTLE SHOP OF HORRORS led to a thriving career in both TV and film. From Comedies to Dramas and on the big screen to your home television set, Tichina’s characters are beloved around the world and well known for their honest reactions to Life’s all-too-real situations. Her roles in MARTIN, WILD HOGS, HAPPILY DIVORCED, THE LENA BAKER STORY, SURVIVOR’S REMORSE, DAYTIME DIVAS, and EVERYBODY HATES CHRIS have cemented a devoted fan-base that reaches throughout the world.

Tichina is a two-time NAACP Image Award-winning actress. The first was for her role as Pam Jones on the hit TV series MARTIN. She earned the second award, Outstanding Actress in a Comedy Series, for her work in the first season of the critically acclaimed comedy series EVERYBODY HATES CHRIS, which was inspired by the childhood experiences of comedian Chris Rock. On the show Arnold played Rochelle, Chris’ (Tyler James Williams) strict, sassy mother who runs the household on a tight budget and is the glue that holds the family together. Since 2018, Arnold has played Tina Butler in the CBS sitcom series THE NEIGHBORHOOD.

In addition to acting, Arnold donates her time to several charitable organizations that serve children. She’s on the National PTA Advisory Board, the largest volunteer child advocacy association in the nation, and she has raised funds for Hire L.A., Voices for America’s Children, The Elizabeth Glaser Pediatric Aids Foundation, Rally for Kids with Cancer, First Star for Children’s Rights and Fran Drescher’s organization, Cancer Schmancer.

“It’s all about the tribe you see. I’ve got a strong tribe of Family and Friends and we are all working together to create the best lives for ourselves and this world.  Whether I make you laugh or I make you cry, I’m hopeful that my work moves you to feel everything.  Most importantly, I’m hopeful that my Life will show my daughter and so many other young girls out there dreaming, that you can achieve whatever you put your mind to – with a lot of hard work and a strong group of support.”

MORENIKE JOELA EVANS is a Director, Writer and Creative Executive Producer who is passionate about creating stories for TV & Film that are compelling, provoking and have heart.
She is one of a handful of African-American women directors breaking barriers in the multi-cam TV space. She recently directed episodes Disney hits RAVEN’S HOME, COOP & CAMI ASK THE WORLD, and BUNK’d. She also directed an episode of the Netflix series FAMILY REUNION—a NAACP Image award winning, multi-cam comedy created by Meg DeLoatch starring Loretta Devine, Richard Roundtree and Tia Mowry.

Her work directing Season 1 of the Google-funded digital series GODCOMPLX (and writing several episodes) won the Jury Award at the 2017 Diversity En Cannes Short Film Showcase and earned her an Outstanding Director nomination at 2017 LA WebFest.

She was promoted to Co-EP/Showrunner for Season 2 of GODCOMPLX where in addition to directing two episodes, she was responsible for shaping the new season’s storylines, running the writer’s room, managing the creative production and overseeing a slate of 4 other directors including Allen Maldonado and Malik Yoba. GODCOMPLX premiered on Amazon in May 2019.

In 2018, Morenike Joela was one of 10 Writer/Directors nationwide selected by the Producers Guild of America to be a 2018 Master of Diversity Workshop Fellow for her original scripted project “FAB,” which is now being considered to be produced by 2 major production companies.
She’s currently in pre-production on LIFE AFTER DEATH, a short film that she wrote and will direct in 2020 about a grieving mom who finds herself leading a one-woman protest when her son is murdered and his death is dismissed as just another black on black crime.

She transitioned to scripted television after an impressive career producing entertainment and cultural lifestyle programming for MTV News, BET, NBC,TNT, OWN,TV One and PBS.

Originally from the DC area, Morenike started as a journalist freelancing for the Washington Post after a successful internship there as a general assignment reporter. She’s a proud Prairie View A&M graduate and a member of Delta Sigma Theta Sorority, Inc. If she wasn’t working as a triple threat in the entertainment industry, she’d be Janet Jackson’s backup dancer, a detective, or an archeologist–in that order.

ABOUT AFFCA
The African-American Film Critics Association (AAFCA) actively reviews cinema at-large, with a particular emphasis on films which include the Black experience. The organization creates a platform for movies with universal appeal to the African-American community, while highlighting films produced, written, directed and starring, persons from the African Diaspora. Our members are also involved in our advocacy work that includes programming for students interested in film criticism and journalism.

AAFCA members are a geographically diverse cross-section of journalists, covering all genres of the cinematic arts, while representing multiple mediums – including print, TV, radio broadcast and online. Collectively, they have reached a worldwide audience in excess of 100 million.