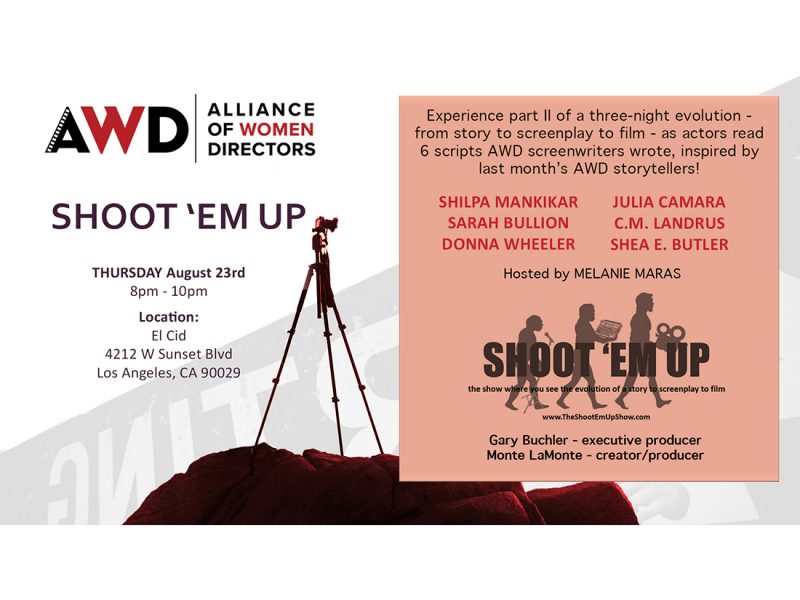 Experience part II of a three-night filmmaking evolution from story to script to screen. This month: The Script.

Watch the stories from Part One: The Story that inspired the scripts for Part Two:

ABOUT SHOOT ‘EM UP
Shoot ‘Em Up is a Los Angeles based show produced by Gary Buchler (Los Angeles producer of The Moth) and Monte LaMonte (All the Feels, Monte Eats) that explores the evolution of a story, to a script, to a film & takes place over three events during a two-month period.

ABOUT ALLIANCE OF WOMEN DIRECTORS
Founded in 1997, Alliance of Women Directors is a collective of professional directors who have banded together to address film industry inequality and support one another’s career advancement. It is vital that stories are told from all perspectives, and AWD is dedicated to creating opportunity for women’s voices in our industry. The organization fosters a community that advances the art, craft, and visibility of women directors in all genres and mediums. Focused on providing education and professional support for members in the form of hands-on craft enrichment and mentorship, the AWD community is tireless in its advocacy efforts to increase opportunities for all.