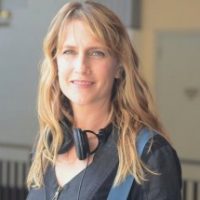 Zaki studied film and media production at UCSD and has been working in the entertainment industry ever since. She has worked as an actress, producer, DP and Director and has made commercials, web series, TV series and feature films. Most recently she worked as a Director for the Oxygen network on the shows ‘3 days to live’ and ‘A wedding and a murder’. Some of her other narrative productions include: ‘Last Night’
(a short that made the festival rounds this year), ‘Out Of Time’ (a short sci-fi film that can be viewed on indieflix.com) ‘Evolver’ (a horror feature for Amazon Studios), ‘The Concessionaires Must Die’ (a comedic feature film that premiered at the Palm Springs international Film Festival).
Born in Los Angles, Zaki grew up in Israel and, during College, lived in France. As a result of her travels, she speaks three languages. As an Officer in the Israeli Defense Force she learned invaluable leadership skills that she uses in all her productions, and also helps her raise her amazing 14 year old son, and marshal an unruly husband.
Her directing reel can be seen here:
https://vimeo.com/264920814