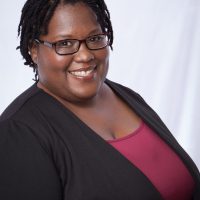 Award-winning independent filmmaker Stacie E. Hawkins hails from Aurora, Illinois and currently resides in the Los Angeles area. She received her M.F.A. in Film & TV Production from Chapman University and her graduate thesis, a 16mm short film, “Like A Woman Should” screened in festivals across the U.S. and Europe.

Her debut feature, The Rise and Fall of Miss Thang, won Best Narrative Feature at both The San Francisco Women's Film Festival and The Independent Black Film Festival of Nashville. It went on to screen in festivals around the world and is currently available on Amazon Prime.

Stacie has also worked extensively in education as a substitute teacher in both the Illinois and California public schools. She is a certified ESL/EFL instructor and lived in Spain for several years teaching English in Spanish public schools.

Stacie is a member of SAG/Aftra and has worked as a background actor/stand-in on various television shows and movies. She has also studied improv at Second City Chicago and TV writing at UCLA Extension. She is an active member of the Alliance of Women Directors and Women of Color Unite.