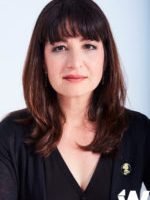 Pamela Green is an Emmy-nominated, award winning filmmaker and founder of PIC Agency. She is a Sundance Institute Documentary Fund recipient. Her documentary Be Natural: The Untold Story of Alice Guy-Blaché was an official selection of the Cannes Film Festival (Cannes Classics), Deauville, Telluride, NYFF, and BFI. The film was released theatrically to critical acclaim in the U.S., UK, France, Australia and many more countries and was nominated for a Critics’ Choice Documentary Award, an Emmy, and a Peabody.

Green creative directs and produces film and TV main titles and graphics, among these the Bourne series, The Muppets, Twilight, and Supergirl. Green has also created award packages. She advises on internal story sequences and has directed commercials for Audi and other brands. She is currently developing a biopic about Alice Guy-Blaché and a female-led detective series, Aces Never Sleep.