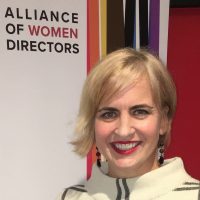 Nikki Braendlin wrote and directed the feature film AS HIGH AS THE SKY, which was released by Cinema Libre Studio after garnering strong reviews and several festival awards. Before working in "the industry," Nikki worked as a counselor in a group home for children and teenagers and co-founded Hear Me Roar Productions, an all-women’s theater company that produced benefits for women’s and children’s organizations.

Current projects in development:
BALLOONS (feature film). A reluctant friendship with two endearing misfits ultimately forces a reclusive meter maid to confront his obsession with death and the guilt that accompanies it. Karen Tenkhoff and Lisa Barrett McGuire are producing.

"animosity" (half-hour dramedy): Jojo Williams has been plodding through her 40s exactly how she prefers—practically invisible. However, when her high school sexual assailant reenters her life, Jojo is triggered into reliving the aftermath of the assault. Fortunately she doesn’t have to do it alone—she has the support of Pumpkin, a hallucination of her younger self. Eleonore Dailly and Lisa Barrett McGuire are producing.

Nikki serves on the Board of Directors for Alliance of Women Directors and is a member of Film Fatales and Glass Elevator.