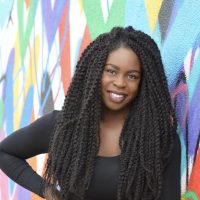 Mora Carew is a first generation Nigerian-American director, writer and producer. She completed her first film "2 Eye Drops from Normal" in October 2021 - winner of the Programmers' Award for Short Narrative at the academy-qualifying 2022 Pan African Film Festival.

From 2018-2019, Mora apprenticed director Peter Bogdanovich in directing and writing, and assisted him in completing Orson Welles' final film "The Other Side of the Wind", as well as the Buster Keaton documentary "The Great Buster - A Celebration". She spent over 1,000 hours of 1-on-1 time with Peter in the editing room, writing together, and watching/analyzing countless films.

Mora is a graduate of Upright Citizens Brigade and 4-time recipient of their Diversity Scholarship. She had the amazing experience of performing around the country for 2 years with her improv comedy team.