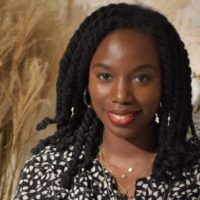 Lande Yoosuf is a writer, director and producer with over 12 years of production development and casting experience at several television networks. Her short film P​rivilege Unhinged screened at the Martha’s Vineyard African American Film Festival, aired on Shorts TV and the Chicago based VonTV. Yoosuf's ​Second Generation Wedding is also airing on VonTV​, screened at Bronze Lens Film Festival, and is now being developed into a feature length adaptation under Lande's production company O​ne Scribe Media.​

Most recently, Lande directed Antu Yacob’s dramatic short film ​Love in Submission,​ which screened at the New York African Film Festival in partnership at Lincoln Center, amongst others.​ ​ The project was accepted into a distribution program affiliated with the Luminal Theatre, Full Spectrum Features, The NW Film Forum and Collective Circle entitled the “Emerging Black Filmmaker Collection”. The film will be screening in theaters throughout the country and will be part of a case study discussion for diversity in Hollywood at the 2021 Sundance Film Festival.

Lande is the co-founder of Black Film Space, a non profit organization designed to support Black content creators. She has served as host, workshop facilitator, speaker and moderator for events with organizations like ARRAY, HBO, ABFF, BAM’s New Voices in Black Cinema, The Root and others.